The Vaccines Play Tiny Show To Help Save Venue 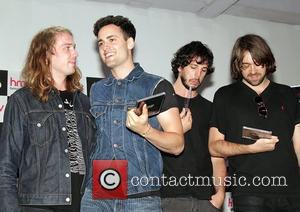 Picture: The Vaccines meet fans and sign copies of their new album 'Come Of Age' at HMV Manchester, England - 04.09.12

British rockers The Vaccines played a secret show at a 150-capacity concert hall on Tuesday (22Jan13) to raise funds for the threatened venue.

The Post Break-Up Sex hitmakers performed a non-profit gig at The Joiners in Southampton, England after the owners of the tiny venue revealed they are struggling to remain in business.

The building - consisting of a bar area with a separate stage and concert room to the rear - is one of the traditional provincial British venues for rising bands and has staged pre-fame gigs by groups including Nirvana, Oasis, and Radiohead, but is under threat following a plunge in profits.

The Vaccines singer Justin Young, who hails from Southampton, says, "This is the main venue around here. It's got so much heritage and so many bands have come through here. If it wasn't for a venue like this, where it's 10 minutes down the road from your house, then I wouldn't have been able to come out and play shows and stand on stage and play songs for the first time.

"There are venues like The Joiners in every town, and every year there'll be someone who's played here that's gone on to bigger things. They're a part of every musical landscape all over the world."