The Vaccines The Who Florence and the Machine

British Rockers The Vaccines Are Convinced The Organisers Of Glastonbury Festival Should Have Booked Florence + The Machine As A Headliner For 2015 Instead Of The Who. 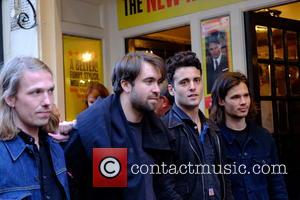 The Vaccines are due to perform at the fabled U.K. music event next month (Jun15) which is to be headlined by Foo Fighters, The Who and Kanye West.

Florence Welch's band Florence + the MAChine are also on the bill, and The Vaccines frontman Justin Young is convinced organisers should have given her the headline slot on the Pyramid Stage instead of handing it to veteran rockers The Who.

He tells Digital Spy, "(The Who are) such a safe booking... I would've had Florence headline... I know she's playing anyway, but people are complaining about the lack of women at the top of festival bills and the lack of new artists. There's a great artist who's huge as well and progressing in more than one sense of the word. Whether that's your thing or not I think it would've been a really big statement if Glastonbury put her at the top of the bill."

Guitarist Freddie Cowan adds, "Headlining a festival is really self-fulfilling and if you give someone the opportunity like Florence, she'd just take it and run with it and the year after she'd be headlining everything. She's definitely a strong enough artist to step up to the plate."

The event in Somerset, England runs from 24 to 28 June (15) and boasts other acts including Pharrell Williams and Lionel Richie on the line-up.