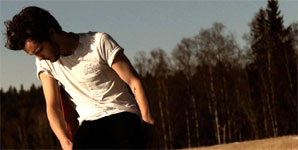 Interview with The Tallest Man On Earth

Not the really the world's tallest man, that's Sultan Kosen of Turkey, but Kristian Matsson (of Sweden) does prefer to be referred to by his moniker of The Tallest Man On Earth. With his third album There's No Leaving Now, Matsson explores much darker territory in his song writing, finally being able to contemplate his demons during the recording process in the familiar surrounding of his home in Dalarna, Sweden. We managed to catch up with him to discuss going back home and what makes this record more of a gloomy affair than some of his previous stuff. And what about his real height, you ask? He's 5'7".

You were in a band called Montezumas prior to going solo; do you still find it more liberating being a solo artist or do you ever want to go back?
It's liberating in a lot of ways, but it's also more lonely and, at times, harder to play so I tend to bounce back and forth when I think about it. I like the challenge of doing it solo - like with the tour coming up - but you never know what the future holds.

What made you split-up?
We actually never really split up; technically, I guess you could say we've just been on hiatus [laughs]. We started out as teenagers then, as we grew up, people had to move to different places and do different things and it just kind of became a hassle to get together. When this started happening, I began making some music on the side, just for fun, and that's sort of how I got started.

You have some pretty famous fans; Justin Vernon in particular; is there a chance that we might see you both in the studio together in the future?
Yeah, I think so if either of us ever find the time as it is something that we've spoken about in the past.

You toured with him briefly when you were just getting started out, do you still keep in touch with Justin or anyone else from his set-up?
Yeah, he's a lovely friend and we still talk when we can.

What is your policy on collaborating with other artists?
It's just a matter of finding the time to do it in really. It's something I'd like to do as much as possible but, frankly, I can just never seem to find the time.

I've noticed, particularly with the songs 'Revelation Blues' and '1904', that you have been covering some dark issues on the album. Does this reflect where you were emotionally during the recording?
Yeah, it is. I had to let it be with the recording and just let it be personal and there's a lot of emotion in there as a result.

You spend the winter back home in Dalarna recording the album - what was your thought process behind going back home to record the album?
I had plans to go to many places and to work with lots of different people before recording took place but, after being on tour for two years supporting the last album (The Wild Hunt), I just felt that I had to be back home. It's weird because it became one of the most personal and maybe darkest albums I'd done yet, even though when I recorded The Wild Hunt I was in a really chaotic place and was just moving around a lot - it just wasn't very easy-going when I recorded it. This time though, I was in a really beautiful place and I had wonderful people around me that I love. At this point in my life, not just career-wise either, I feel that I was in the best place I'd ever been. But this gave me the platform to just deal with all the anxieties and fears I'd concealed before and make an album that was really personal and ended up much darker as a result.

Did you find that going home provided the much more intimate setting you needed to flourish in?
Yeah, it did. It meant that I could just do whatever and have free reign with my material. It's kind of a good and bad thing really because, while I have complete freedom, it just becomes this chaotic process that, in a good way, helps me record and write a lot of music, but it ends up so chaotic that you can sometimes lose track of things at times.
It meant that I could record all the broken sounds I wanted and it came out sounding distorted and brittle which is how I wanted it.

Other than the return home, had much changed for you in regards to the recording of the album?
Yeah, it actually did. I don't know if people can hear the difference between this and my last album as well as I can, but I worked much harder to get this lo-fi, crappy sound [laughs]. I think the whole process improved somewhat because I got better control to do what I wanted to do really; the last couple of albums, I really made them in a rush - just a couple of weeks and it became what it became. Now I had some time to sit down and try different stuff. I came out of the process of writing four or five songs that I thought would be on the album and started being more scrutinising. This time I'd write a song and end up throwing it away then going back until I had a bunch of songs all about the same kind of thing. It was an interesting process to go through really.

You'll be heading back on tour soon - do you like to see yourself as a troubadour?
No, not really. I do enjoy doing shows and meeting people, but.

Prefer spending time in the studio?
It's not so much that I would rather be in the studio; I'd just rather be at home. I'm not a traveller in my soul really, I prefer being around the people I know in familiar surroundings.

Will you be visiting any new and interesting places along the way?
I had the luxury of going to South Africa earlier this year. I got to do two amazing shows in Cape Town and Johannesburg and that was new and interesting. I'm just really grateful when I get to travel and see all of these places really, it's not like I have to play every night like with the crazy tours I did in the beginning because I had to make every cent I could. What's great about it now is that I can have a little time to myself and I get to actually see some of these places for a day or two and this is something that I'm looking forward to for the next tour.

Back to the song writing, you tend to write your songs in such a multi-facetted fashion that there's no clear meaning - do you purposely want the listener to make up their own mind on what some songs are about?
Yeah, they have to really; it's just the way I write, I guess. I wish I could be a better story teller or something but, because I only kind of understand what they're about through all the absurd, chaotic imagery, I think it's better for the listener to make up their own mind anyway. Nothing's written in stone.

What kind of artist do you like to see yourself as? Do you like to label yourself?
I just try to write solid songs like I've been trying to do now and just keep getting better at that, the rest of the time I try and play them. I don't really see the necessity in having any kind of label attached to you.

Who did you grow up listening to?
I listened to lots of different things growing up. You know how it is as a kid; I started out listening to pop music and then went on to listening to a lot of punk rock and garage rock, even some metal as a teenager. Then, when I got into my late teens, I started listening to Nick Drake and tracks like 'No Blue Skies' (Lloyd Cole), but still to this day I listen to as much different stuff as I can.

Was it around the time you started listening to Nick Drake etc. that you first started playing music?
No, I was playing way before that; I started out playing in really crappy punk bands and some not so crappy punk bands before I'd ever heard of these people. I played the guitar since I was a kid; I wasn't really into playing and writing songs until I got an electric guitar though; and when I started playing in these crappy and sometimes not so crappy punk bands, I think I was around 14, 15, 16 when I started doing this. I got back into playing the acoustic guitar when I was in my later teens though.

Is there one album from your past that you wish that you'd have written?
It's not that long ago, but For Emma, Forever Ago (Bon Iver) is extremely important to me personally. It's one of those albums that became a part of me as soon as I'd listened to it really and, I guess it sounds pretentious, but it really changed my life. When I got the luxury to go out on tour with them, it really encouraged me to do what I do today.