The Sun One Direction Zayn Malik

Zayn Malik Feels "Good" And "In Control" Of His Life After Leaving One Direction Because He Had Been Unhappy In The Boyband "For A While". 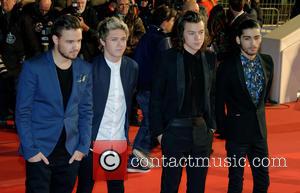 Malik upset One Direction fans around the world when he announced he was quitting the group on Wednesday (25Mar15), less than a week after he exited their world tour due to stress.

Speaking for the first time since the split, Malik insists he is happy with the decision, which he had been putting off for months because he did not want to upset the fans.

He tells Britain's The Sun newspaper, "It is crazy and wild and a bit mad... but at the same time I've never felt more in control in my life... and I feel like I'm doing what's right - right by myself and right by the boys, so I feel good.

"You know, I did try to do something that I wasn't happy doing for a while, for the sake of maybe other people's happiness... and that was mainly for the fans. I only ever tried to do it for the fans, and it was only ever for them.

"And basically, I'm only upset (because) I feel like I may have let them down in some sort of way... That's the main thing I don't want to happen... It's not that I've turned my back on them or anything, it's just that I just can't do that anymore because it's not real to me."

He also dismisses rumours of infighting in the group, adding, "My band has been really supportive. They've been cool about it... and they understand that, you know, it's not real to me anymore", and of his pop star fiancee Perrie Edwards, he says, "She's always supportive".

According to the newspaper, Malik headed to a recording studio this week (beg23Mar15) to work on solo material, but he is in no rush to release new music, adding, "I'm just going to chill man. I'm just going to be me for a while."