The Streets - When You Wasnt Famous Video 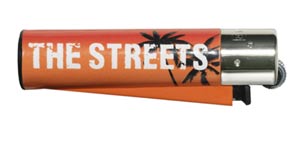 The Streets
When You Wasnt Famous
Video Stream

Mike Skinner returns with his first single since The Streets' number one album 'A Grand Don't Come For Free', with a sure sign that his life hasn't got much easier. 'When You Wasn't Famous' is as brash, immediate and witty as anything he has previously put his name to and head and shoulders above anything else of its ilk, once more proving that nobody spins a yarn quite like Skinner.

An autobiographical trip into the world of the now notorious rapper, 'When You Wasn't Famous' is the flipside of fame's shiny coin, the true story of his pursuit of a celebrity girl that put him right back to square one of the dating game. Delivered over a pristine Baile funk backdrop that proves his production nous continues to develop at a faster pace than that doomed relationship, the lyrics reveal the murky truths behind the Heat-style white-toothed smiles; "considering the amount of prang you'd done you looked amazing on CD:UK".

The Streets' third album 'The Hardest Way To Make An Easy Living' is set for release on April 10th and sees The Streets switching up his rapping, twisting out the production and laying open some heartfelt lyrics accross its eleven tracks. Getting bandy has clearly been high on his list of hobbies in the last two years, as "I realise with you the truth can be a whole lot worse than the flak, my whole life I never thought i'd see a pop star smoke some crack".

None can talk about real life on record in the same compelling wry and observant way as Mike Skinner, and 'When You Wasn't Famous' provides the perfect introduction to what is set to be one of the most talked about albums of 2006.

'When You Wasn't Famous' is released on Warner Brothers Records on 27th March. A full tour will be announced shortly.