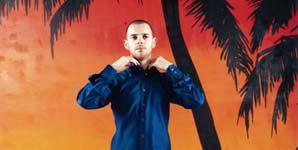 Mike Skinner's third album "The Hardest Way To Make An Easy Living" may be a murky journey into the flipside of fame and all its trappings but it still harbours one of those emotion-laced goosebump classic that will melt the very hardest of hearts. "Never Went To Church" is the tribute to his recently-deceased father that marks a highlight of the number one album and arguably the most mature and complete piece of song writing he has conjured so far, full of heart-stoppingly beautiful couplets and the kind of genuine sadness that few artists have ever had the ability to convey in song.

His Dad passed away not long after the release of "A Grand Don't Come For Free" and the various stages of Mike's breakdown described on the new record can largely be attributed to that traumatic time. Lines such as "If you were still about I'd ask you what I'm supposed to do now, I just get a bit scared, I hope I made you proud" show an emotional frailty that 2004s number one smash 'Dry Your Eyes' may have hinted at, but rarely reached so poignantly. Then of course an opening line like 'Two Great European narcotics, alcohol and Christianity Ã¢Â€Â“ I know which one I prefer" makes it clear that a wry observation on society is never far away from Skinner's thoughts.