The Static Jacks - If You're Young Album Review

Review of If You're Young Album by The Static Jacks

'I'll kill you with my words, and I'll kill you with mine,' seems like a mere simple phrase but conjured in the world of 'If You're Young' and it's like a punch to the stomach, winded. 'Girl Parts' features a female contribution (it couldn't not really) from Brooklyn based Beast Make Bomb's singer Cici Gomez, who begins to tell Frontman, Ian Devaney where he stands. But he's not having any of it. It's not the first song to have an argument entwined, and it certainly won't be the last, but it's lovely to hear both sides of the story. 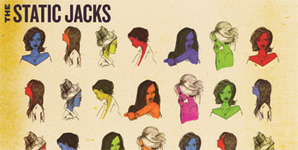 Oops sorry, you may be asking who is this band? . Meet The Static Jacks, four New Jersey lads who sound like they just want to throw a rowdy all night party and sing (sometimes shout) about the remembrance of being carefree, young and wild. Now they aren't fifty somethings, looking back on their valuable youth - they are twenty-somethings looking on and living it, consequently giving the record a ravishing power and focus.

The Static Jacks may have released this album last year in the States but it's pretty given that the decision to release it over in the UK was a good one. The band have previously toured with The Wombats and The Futureheads, and 'If You're Young' seems to encompass a fair few familiarities that echo the British scene. They've got rawness, something like The Cribs come Oasis and the obedient string plucks in 'Mercy Hallelujah' resemble a The Smiths-like touch. 'My Parents Lied' and 'Relief' have a mild tinge Razorlight emerging (yay or nay? However you want view this.) A very American pop punk influence is heard to smooth the raucous over (and create some more). The pacing riffs and wiry electric guitars, in 'Into The Sun' and the 'woahs' that engulf 'Blood Pressure' are something that any stateside punkster would be proud of.

All of these aspects mean one thing really, well two things. A. They've cited their influences well and B. They sound like they're a good live band. It's a bit of a bold statement to make, but there's so much energy crammed into this album. So much drive and ambition that would be sure to get a crowd going as wild as they would be on stage. The synchronised clapping that opens the album in the mysterious 'Defend Rosie' is enough to be the judge of this. When the live strength is streamed through a record without you having to physically be in a sweaty atmosphere, then you know there's talent there.

The Static Jacks - If You're Young