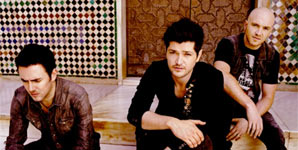 Dublin pop rockers The Script have had a stellar but short musical career in the past two years; both of their albums having made it to the top of the UK charts and having had immense success in the US. Frontman Danny O'Donoghue talks to us about the UK Tour they are about to embark on and what the bands plans are for the future.

CM: Afternoon Danny, how you doing?
D: I'm doing great thanks. I could do with some lunch though [laughs].

CM: Are you excited to be starting your headline tour on March 14th?
D: Yeah I guess excited, nervous; this is going to be a momentous occasion for us. The Script is now moving to the different realm of the arenas. So now we're not going to be hoaxed by a small stage or by 2000 people, it's now going to be 20,000 people. You'll see the shows being a lot more open. What we're trying to do is have these shows and people go away saying 'wow we've heard them on the radio but they can put on a good live show'. There's no one that has come in to say 'dancers are going there and costume changes' etc. I think the music will really speak for itself. You can put much money as you want into production but what really makes The Script are the fans.

CM: All your shows are now sold out; one date having sold 150,000 tickets in one day. Do these sort of statistics surprise you?
D: Yeah, definitely. It's like a 21st Birthday party; if you invite a number of people along, you watch every ticket and check every RSVP. So to know how many people are going to be there is a big thing for us. For the statistics, I've heard about some artists that when they get a big hit, it is just another one for them, but to be honest, for us, everytime we get one, it feels like the first one really.

CM: Are you looking forward to go back to play to your homeland Ireland?
D: Of course. It's where it all kicked off for us. Anyone who has loaned me money or whose couch I've slept on lives in Ireland so I can at least give them a free ticket and they can come and watch us. I can now go on stage there, put my hand up and be proud from where I am from.

CM: You have also just announced you will be playing in Singapore as part of your world tour. Is it exciting to be going to these new places, and which city are you most looking forward to visiting?
D: I always look forward to places I've not been before. The Script are going to be there towards the end of this year so we've got a lot of set-up time. We're playing pretty big places so I'm quite unnerved [laughs]. I've not even been to these places but people have been ready to buy tickets for when we come. There are talks for Hong Kong and India - I'm like 'let's go!'

CM: Talking of worldwide feats, Science and Faith went to number 3 on the Billboard Hot 100. How have you found breaking the US?
D: We've travelled to America about 24 times for the past two years - just imagine the Airmiles on that. We made a decision at the start of this that we don't want to just be a UK or European act; we want to pay homage to where our music came from, which is America. So making it in America has always been on the radar for us but to really massage our music into the American consciousness has been hard. Getting it on TV shows, ad campaigns and trying to get it anywhere and anyhow you can.

CM: Was there anything you had to do differently from the UK?
D: Slow-down speaking I guess. That's been the only thing. We joke around how it would be hilarious if they add subtitles underneath what we've been saying. But we've been lucky that we haven't had to change anything for The Script to break America. Just doing what we do.

CM: The news has recently quoted you criticising Jarvis Cocker for putting Pulp back together. What's the source behind the animosity there?
D: There's nothing at all - I wasn't misquoted but it wasn't put in context. It sounds like I was having a lunge at Jarvis Cocker himself but it was completely justified. It's hard to believe that bands are getting together for the right reasons. So when I was asked 'What would you do if Jarvis jumped on your stage like he did with Michael Jackson', I said 'if he did that, he'd get a guitar in the face'. That was it; you could've put anyone's name in there. It's not like me. It's like the biggest two nerds in school having a fight - are you kidding me? [laughs]

CM: So it's not going to be awkward with him when you both play T in the Park this summer?
D: Not in the slightest. He's an intelligent guy and he knows that I wasn't being personal. I'm looking forward to sharing a beer with him backstage.

CM: Are there any other festivals you are lined up to play this summer?
D: Yes, Oxygen, V-Fest - the staple for The Script. We were going to do Glastonbury but our American dates just went on sale and they're doing better than we expected so we might have to miss out on Glastonbury, even though it pains me to say it. V Festival is the best festival we play anyways. V Festival was the very first we played so it was a David and Goliath kind of thing for us. We went on, did a great set and it changed my mind about festivals. Oxygen too was fantastic. Just 80,000 people, our own music, our own stadium, our own crowd - it was brilliant.

CM: How was it when Paul McCartney took time out to give the band advice?
D: Fantastic, it was just us sucking up [laughs]. When you meet anyone like that, you don't say anything; let him do the talking. If anything, he'll teach you a thing or two. He was just teaching us about being on stage and how to make 80,000 people feel like they're on stage with you. What a man. We're massive Beatles fans - we've done all that; drinking Magners cider and listening to Sgt Peppers.

CM: Are you writing material for a third album?
D: No, we're just chasing the Science and Faith album around the world. As much as we're embarking on a UK tour, it's only just happened for us in America. They're just about to release Just for the First Time. We will have nothing for after If You Come Back so probably at the end of the year we'll start writing again.

CM: Do you have any idea where The Script will go from here? Will you be experimenting with a new sound?
D: I think production-wise, we're going to produce keep a similar sound; I don't think we're going to change that at all. I think as the band progresses, you'll be able to see the difference between the first and second albums, with the heavier guitars in there. A lot of critics said that we had kept it the same. It took us a long time to figure out what works, and if it works it works, why change it? I'm not saying it will be entirely the same but it will be the same style of song writing and the same voice; that's what holds it all together.

Thanks for your time Danny.