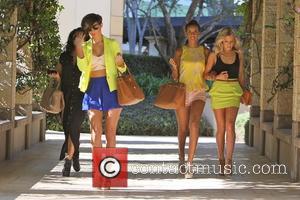 The Saturdays star Rochelle Wiseman was moved to tears during a charity trip to Africa last month (Jun12) after meeting children who have been forced into marriage.
The British singer was joined by her bandmate Vanessa White for the visit to Tanzania in support of U.K. charity Comic Relief, and Wiseman was overwhelmed with emotion as she encountered young girls who wed before they even reached their teenage years.
She tells Britain's Daily Mirror newspaper, "Child marriage is considered a common way of helping families financially, as fathers are paid what's called a 'bride price' - a gift of cattle from the groom. Sadly, many girls are left destitute, divorced or widowed with children to feed... We're so lucky back in the U.K. We don't have a clue how hard life can be for girls and young women."
The singer admits she was touched by the story of 18-year-old Magreth, who was forced to marry an older man at the age of 11 but managed to escape her tough surroundings and turn her life around with the help of a female empowerment program.
She adds, "Although I was in tears listening to stories like Magreth's, you can really see the positive impact the project is having there."
Wiseman, who wants to carry out similar charity work in Uganda, also reveals she feels bad about her upcoming lavish wedding to JLS star Marvin Humes after seeing many youngsters forced into marriage in Africa.
She adds, "It made me feel really guilty. You get so caught up in what you buy, and the flowers and who you're inviting. It's such a different experience. You think, 'I'm getting married, it's a laugh'. But when they talk about marriage... you can tell on the girls' faces that they're not happy about it."