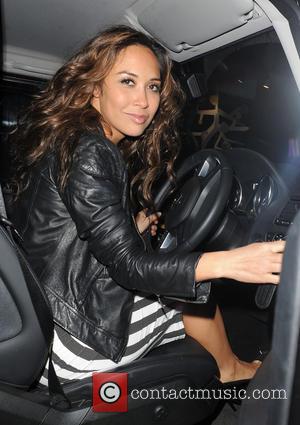 Picture: Myleene Klass arrives at Amika nightclub in Mayfair, to celebrate The Saturdays first number 1 UK single. However Myleene left the party after only 15...

Pregnant The Saturdays singer Rochelle Humes has gone on maternity leave after playing a farewell show with the girl group in London.

The British pop star, who is preparing to give birth to her first child, took to the stage with the band for London's famous G-A-Y event at Heaven nightclub on Saturday (23Mar13) and she declared it would be her final show before giving birth.

In a series of posts on her Twitter.com page, she writes, "This is gonna be my last show before I become a mummy... (It was) the best send off ever!!! Thanks G.A.Y... Sad that it's my last show for a while but I don't wanna give birth on stage."

The star will welcome the baby, her first child with her JLS singer husband Marvin Humes, later this year (13).

Humes also celebrated her 24th birthday at the show - she was presented with a cake in honour of the milestone on Thursday (21Mar13), while on Sunday (24Mar13) the band was celebrating again after scoring its first ever U.K. number one single with new track What About Us.