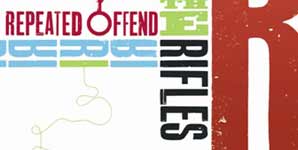 'Repeated Offender' is the first shot from The Rifles sessions with producer Ian Broudie (The Zutons, The Subways). Recorded in Mickey Most's legendary RAK studio, the band that have already made a 'hottest record in the world' according to Zane Lowe and had Graham Coxon singing their praises, return with their sights even sharper.

Their division of young fans, hard won playing the pubs and clubs of the land, already propelled their recent single 'Local Boy' to number 36 in the charts. For their new assault, Broudie took the band's garage sound, stripped it out, refitted it with handclaps, tambourines snaps and tremolo guitar to magnify the infectious pop melody hiding amongst all the feral energy.

While the beat is Motown on amphetamines, the lyrics teach a Walthamstow street lesson The Specials could have written 20 years ago. Lead singer Joel Stoker explains: "It's about one of my mates but I don't want to say which one incase he fucking reads about it. Everyone's got one of them in their group that's just a nightmare when they have a drink. They start trouble every time they go out." The message couldn't be put more pithily in the lyrics: "Now don't you pretend when you wake in the morning/ you're lying to yourself it won't happen again/ repeated offender you should come with a warning/ it's embarrassing for all of your friends."

Come and check out The Rifles incendiary live show.

The Rifles will then be supporting the Dead 60's on the following dates.