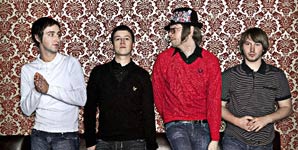 From playing their very first gig to the mouths of indie-informed persons everywhere in just 24 months, The Rifles intend to ride the wave of success as high as it'll go. Contact Music had to run very fast and got very tired finding that wave all so that we could bring you this interview. Behold – THE RIFLES discussing music, the album and that infamous gig on the Camden Crawl…

Hello The Rifles. How are you guys doing?

A bit hot and a bit sweaty, but good.

Your debut album 'No Lost Love' is out in a couple of weeks now. How's all the pre-release press been treating you?

Really well. I just saw this morning in FHM there was like a really nice bit on the album and stuff which was really great. All the main magazines seem to have reviewed it and they've all been good so we're quite happy. NME have been…well our relationship's been a bit rocky with NME. Originally I think they really liked us when we first released 'Peace and Quiet' and they gave us a good review, but it took us like quite a long time to finish the album. That was about a year and a half ago now. But they're cool; they seem to be coming round.

You actually referenced NME in one of your tracks. Why did you choose to do that?

Hmmm, well we were just taking the piss out of people that listen to NME too much. They just seem to have so much power over the music industry at the moment and it's just annoying. I think a lot of people just take too much stock of it.

What about Myspace? Are The Rifles riding the wave of the Myspace revolution?

*Laughs* Yeah, we like Myspace. It's well good – a well useful site. That just sort of cuts out all the crap because there's no one there telling you what to like. You can just go on there and check out whatever you want and if you like it you can listen to it. We must spend about 3 hours a day on it, even when we're on tour. But it's addictive though. It's not even because we're trying to be good to our fans or anything like that!

…And there's lots of fit girls on there as well.

No, don't be silly. Those are just the pictures they put up.

*Laughs* It's true. I'm starting to really clock that now.

So what would you like to say to fans about the vibe of the album?

It's more like an uplifting kind of album, know what I mean? Quite summery. I think it's a feel good album - it's all pretty upbeat, so if you're looking for depressing songs don't buy it.

It didn't really feel like we were recording an album. It was all in bits and kind of up and down 'cos it took a long time to do. We went around a lot of different studios and didn't record it in one place. We did some of it in Liverpool, and about 3 or 4 studios in London. You'd sort of come home and see your mates for a week too. Then we had a two week gap to tour in the middle of it, so it was hard to completely focus on the one thing 'cos there was so much stuff going on.

You guys had only played your first gig back in January last year. It was the 'Bull & Gate' in London, a particularly small venue. How does it feel to now be headlining a UK tour?

It's a great feeling. We're just really happy to be where we are aren't we? It's nice to know you're going to the other side of England and the place is gonna be full up with people that wanna hear your stuff. Like a couple of years ago we'd have to ring up every one of our friends and their friends to get them to come, so it's just well cool to be in this position. It's still early days as well really init?

Bull & Gate man! That was like our first gig. I reckon we should play there again soon!

Did you get one of those little videos that showed your performance?

Yeah, they were cool! I remember when we got our first one of those, do you remember? Fu**ing hell. You gotta buy it as well! It's about seventeen quid. We got conned man! But to be fair it's worth having just for the comedy. *Laughs*

We should put that on the website just for a laugh.

What other bands do you hang out with on the road?

Um, well it's only the ones we've played with really. Milburn – we just clicked with them straight away. We were away with them for about three weeks, so that was cool to have such nice fellas. You know, spending all that time with these people and if they turn out to be ass holes it'd be a nightmare I think.

All the guys though: The Switches were nice people although we never got to know them that well but we exchanged numbers and they're cool…and the Subways are really nice. And the Dirty Pretty Things…well that was only a few gigs, but they were a bit too big weren't they? We were like *Luke actions an upward-looking reach in awe*

They would talk to us, but they were just so busy I think.

Yeah he is. I saw him in a wine bar the other day. And their new guitarist is a lovely guy as well. He was their roadie wasn't he, so he's just so down to earth now 'cos he must be just loving it. Otherwise Dirty Pretty Things were just busy really.

You seem to be a band that promote yourself with very proud London roots and very British song writing. The Clash for example are a major London influence. How do you see this reflected in your music and your lyrics?

I just think it's like that naturally. It would be because this is where we're from – East London. It's not really a conscious thing, it's just the way it happened; that's the sort of material we're working with. We're not all about London. Our music is just about day-to-day life and it just so happens we live in London.

Your show on the Camden Crawl has become known as a particular success. What would you say has been the high point of your touring days so far?

Ahhh yes, the Camden Crawl. That was quite a high point; also quite a frightening point. Our stage got invaded about twice and completely mashed up. The crowd went mental; it was really scary at the time. But the funny thing was we had our tour manager in front of us trying to hold 'em all back and he was getting battered. His face was like pure panic. *Laughs*

The second half of the set was about three deep in the crowd actually on the stage. I got to see Dirty Pretty Things that night as well.

*Laughs* Oh yeah, Joel got into a fight with some punks that night somehow. Some punk rockers had got beaten up – nothing to do with us at all – and one of 'em started on our tour manager.

Someone actually tried to beat up The Rifles!?

Yeah they were trying it! But they failed miserably. Joel swung at one of them, decked one of them, but then they came back with all their punk-rocker mates from Camden. One of them had a plank of wood! The place had cleared out so we were just loading our gear at the time and that's when it all happened.

It was a funny night…

Are you guys gonna watch the next England match?

What type of new music are you guys into at the moment?

Oh there's loads; so many bands with good songs here and there. Milburn, Yeah Yeah Yeahs…and even that new Razorlight song; I don't know what's happening to me! *Laughs*
The Raconteurs as well, and The Strokes – saw them at the Wireless Festival. It's a good time at the moment for new music.

Yeah, there's just so much competition on the indie-rock scene at the moment. Do you ever feel that you are in some way rivalling all those other bands?

I guess we're always in competition, but we don't feel it really. And it's not really a bad thing; the competition means you have to raise your game. It's good when new music comes out because I think it pushes you – like to write more and just improve yourselves. There is a lot though. It's saturated init? Especially in the UK.

New single 'She's Got Standards' is an open attack on groupies and celeb life. What drove you to write it?

I don't even know why that got written about. It was probably just in the practice room that someone mumbled a line. It's not a serious attack, it's just a piss take really. But a lot of the time we do sit there and go "oh we should make a song about that". It tends to be that once Joel gets an idea of something to write about, it all comes together quite fast really.

So Joel, was the song's narrative based on real experiences…?

*Laughs* To be honest – yeah there have been groupies, but not stupid amounts. It was more of an observation rather than a personal experience.

*Luke candidly interrupts* Yeah he hasn't has his cock sucked that many times…well not by groupies.

What would you most like to achieve with The Rifles?

Anything from here on in really. I mean what a way of life just making music and putting it out for people. I think that's all we could ever have dreamed of doing. It's better than just sitting at a desk and doing something else. I think as long as we're happy and just keep doing what we're doing, everything that comes on top of that is a bonus. If we're not enjoying it then we don't want all the success in the world – not if it's a fucking pain in the ass. We're making music because we like doing it and that's it. A lot of bands get so successful that they don't even like it anymore, don't they? And what's the point of that? Having shit loads of people loving what you're doing but you're just hating it.

Music is a mad thing – it can change things, it can inspire people and if we can have any part of that then that's great.