Review of The Rifles live at Leeds Refectory on 22nd March 09. 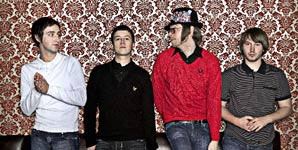 The Rifles have a tea leaf problem. Apparently, early gigs on this delayed UK tour have been blighted by dodgy geezers on the make between songs; pilfering watches, wallets and worse in the darkness. Contemptuous irony at work perhaps; as these diamonds in the London rough have been picking the pockets of Mod's royal heritage since 'Local Boy' stormed the indie mainstream back in '05. Their modus operandi is well established and their sta-pressed public adore them for it.

To a celebratory fountain of plastic bottled lager and West Riding amphetamines, the four piece storm the Stylus stage with 'Science is Violence'. A Sunday night has no right to offer such chaotic release to northern souls. The set that ensues reveals both polished sides of The Rifles' coin. Heads for the love-torn pitch perfect pop of 'When I'm Alone' and 'Romeo and Julie' - tails for the high-rise, hamster wheel desperation of 'Sometimes', 'Toerag' and 'The Great Escape'. They flip effortlessly between the two, as the crisp precision of their live performance hints at the graft they have put in to arrive here. Despite being frequently over-whelmed by gleeful, stage-diving Ben Sherman's - it is front man Joel Stoker's glass is half empty side that prevails. He retreats to the acoustic comfort of 'Spend A Lifetime' and in closing encore, wrings every drip of social conscience from debut closer, 'Narrow Minded Social Scene'. Nothing from their second long player yet has the incendiary potential of 'Local Boy', so the boys wisely send their faithful into the night with it ringing in their ears.

The pervasive nature of music in all its cyber forms has robbed the noughties of anything even approaching what we might have before called a movement. The result; a kind of permanent mini-revivalist merri-go-round where every turn has its past masters and its mimics. So; despite their brazen influences, why shouldn't The Rifles deserve their place serving both teary eyed, nostalgic Modfathers and their speeding offspring? As tonight's evidence shows, a well ridden Vespa can still show a clean pair of heels to the most polished vintage Lambretta.