Review of Fall To Sorrow Single by The Rifles

Review of The Rifles single 'Fall To Sorrow'. 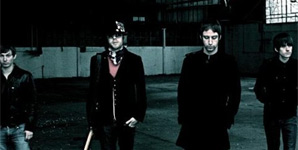 Heading out on a tour of the UK in March, London boys The Rifles are now promoting second album 'Great Escape', from which this single is taken. A mainstream breakthrough has thus far eluded them since their 2006 debut, but admiration in the industry is demonstrated by Paul Weller joining the band on stage at a London Forum gig.

'Fall To Sorrow' is a decent enough up-tempo guitar track and has a backing vocal so easy to grasp that they could be a baby's first mutterings. Where The Rifles misfire (sorry) is that based on this evidence nothing makes them standout from the indie crowd. This might as well be a Pigeon Detectives number and the lack of success for the Leeds band's second album shows how easy it is to be flavour of the month and then forgotten. This quartet could get that support, but whether or not they can maintain it is another matter.