Sheffield trio The Retrospectives have now unleashed a new video for their latest single 'Insane'. It's their third single of the year, but there's no word yet on what to expect from their forthcoming album.

The video flicks back and forth from a speeded-up driver's view of a busy road to the band performing their new track. The song, which was released in August 2014, begins with an almost country style twang at the hands of the breathy vocals and gentle guitar, before a dreamy synth echo kicks in turning it into a melancholy affair. There's a sing-a-long chorus and an edgy guitar solo to be had as things progress, making this track truly one of their most listenable yet.

The band; who are vocalist and guitarist Tom Galton, bassist Will Stocks and drummer Paul Jackson; united as a three-piece in 2013 and this year have produced three singles this year including 'Bittersweet' and 'Gold & Green'. Preceding this, however, was their debut EP 'Turn Me Up' led by single '52 Records', which they soon followed with a UK tour supporting the likes of The Boomtown Rats, Night Engine, Paper Aeroplanes and The Buzzcocks. We spoke to the band recently who revealed their future plans. 'At some point we're looking to do another longer release, an EP, and eventually an album', they said.

Interview with The Retrospectives September 2014 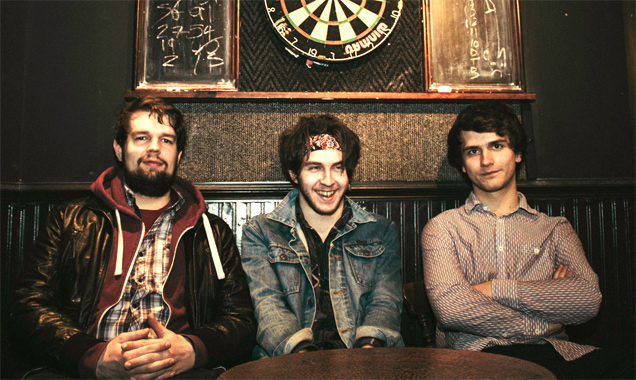 With The Retrospectives' latest single 'Insane', the band show us a different side to their vintage inspired indie rock. They're a band who are doing things the 'old-skool' way; touring, building a strong fanbase and getting music fans truly excited about who they are as a band. Here, they tell us what their latest track 'Insane' is all about, what it was like playing with The Boomtown Rats and their latest plans.

Contactmusic: It's been mentioned you were exposed to a lot of bands from the 60s and 70s - which bands from that time have had the most impact on you and why?
The Retrospectives: I think when you're young and in a band that are just finding their feet musically, you can listen to a ton of music and still be struggling to find something to take influence from. Most great music is something that's just inspired someone, been copied, flipped on its head and turned into something new. I think the first time we really found something that inspired us was when we started listening to Elvis Costello. It just somehow seemed in our repertoire to do something with it and take it on board as an influence. He has the attitude of the punk, the playing ability of rock and rhythm & blues all tied together with really good lyrics. It just seemed something we could relate to really easily. I think it's from there that we really started to build on our sound a bit more and since then we've drawn a lot of influence from bands like Fleetwood Mac, Led Zeppelin, Free, Tom Petty and even The Rolling Stones. I think it just took finding one thing that we could adapt and make our own before we could really start listening to other bands and say, 'We could do that!'.

CM: Do you think there's still a place for good British guitar led music in 2014?
TR: There's a place for every kind of music in 2014. The music industry is more and more moving away from a mass market to a mass of niche markets. There's an audience on the internet for almost any kind of music, even incredibly specific sub genres. Us personally, we're not trying to re-invent the wheel, we just feel that a lot of the music that was handed down to us from the previous generation, music that we grew up listening to, is under-represented in the influences of a lot of modern British bands. We try to write as honestly as possible, taking influence from what originally got us excited about music in the first place, which for us just so happens to be guitar led music.