Review of Blood/Candy Album by The Posies

It's such a 21st century thing to be most famous for having your music featured as a part of software, but as unlikely as it sounds, this is how The Posies have reached their widest audience, with tracks I Guess Your Right and Love Comes coming bundled in with Microsoft's Vista operating system. Given that Bill Gates and his crew probably consider Foreigner to be "Rad", you have to say that by their standards it seemed like quite a progressive choice. 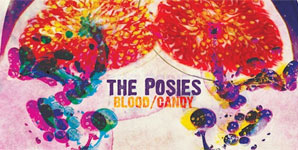 For a band that coalesced in Washington in the late eighties around core members Jon Auer and Ken Stringfellow, The Posies have been less than prolific, releasing just seven albums in the last twenty odd years, although they did have a split and consequent hiatus at the turn of the century. Whether this lack of output has been due to to public indifference is a point of debate, but five years since I Guess Your Right's parent long player Every Kind of Light hit a million laptops worldwide, we now have Blood/Candy, of which Auer has been quoted as saying we should "Expect the unexpected".

Unexpected that is if you're unfamiliar with the work of little known underground bands like The Beach Boys, Crosby Stills & Nash and REM. On his days off Stringfellow also lends a hand to the vastly underrated and hugely influential Big Star, and all these modern classic American influences inform a collection that's thankfully a world away from their largely charmless and invariably dull nineties output for Geffen.

This approach to songwriting - essentially welding college rock to sixties psychedelia and beat pop - is hardly original, and older readers may point to the work of eighties outfits like Dream Syndicate and The Rain Parade, the stuff of which much of Blood/Candy shares a healthy bond. When they get it right however it feels highly irresistible; the gentle harmonies of The Glitter Prize shimmer in the sunset, whilst the slightly more muscular Cleopatra Street will remind Fountains of Wayne fans just what they've been missing since the towering Welcome Interstate Managers.

All things considered then there's clearly enthusiasm in abundance, although some of this is counteracted by a tendency to opt for the straight up effigies of Michael Stipe's mob, especially on the likes of So Caroline and Notion 99. There's even an appearance by the former Stranglers front man Hugh Cornwell on opener Plastic Paperbacks, but mostly this is the sound of a band now doing what they do because they can, rather than for critical dissection. As if to emphasise the point, closer Enewetak (It's an atoll in the Marshall Islands, but you knew that) delivers one of those classic blue eyed cups of major key froth, whilst careful listening reveals a strident anti-nuclear message in the lyrics. You imagine that in a darkened building somewhere, a mouse is clicking away in the background approvingly.