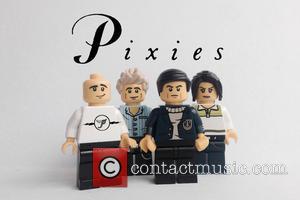 Picture: Pixies - Adly Syairi Ramly, a self-proclaimed music and LEGO junkie, has transformed the toy brand's famous figures into some of the world's most iconic...

Fans of the Velouria hitmakers were stunned when it was announced Deal had walked out on the band after 27 years and it later emerged she had told her shocked bandmates during a meeting in a cafe.

Now Francis, also known as Frank Black, has revealed the news came as such a surprise he decided to shave his body hair to signify his need to move on.

He tells Mojo magazine, "(It was) to mark a new start... I think I may even have used some of the hair in a painting I was working on at the time... I'd done this kind of nude. The hair was an outline on the painting."

Francis also recalled it was not the first time Pixies had come close to losing Deal, as he had planned to fire her in the 1990s.

He adds, "I tried to kick Kim out of the band a couple of times, in the early '90s. I managed to find some reason. A meeting was called in our lawyer's office (but) the lawyer, along with the group, petitioned me to keep the boat afloat.

"Whatever my reason was at the time, I'm not saying I would consider it valid now. She hadn't showed up for a gig or something, or she was late and we had to go and find her, passed out somewhere. Nowadays I look back and think, 'Rock 'n' roll, what the hell'. I was in my twenties, smoking a lot of pot, a bit cranky."