By Tareck Ghoneim in Music Reviews on 19 June 2017

I was particularly excited to attend Parklife in Manchester this year, the line-up looked incredible and considering the recent trauma in Manchester, it's great to see the city is strong, resolute and still a leading authority musically in the UK. Manchester has been through a lot in the last 20 years. It's always had a profound musical background, with the likes of New Order, the Hacienda and Oasis all proud to call it their home city. What many people forget is the influence of break dance culture in the city; the likes of Greg Wilson fused dynamic urban culture with music and kept hip hop alive and well in the North. This passion morphed into great record shops, labels and events - notably The Warehouse Project who are a significant part of the team at Parklife.

I was stunned to see Frank Ocean headlining Sunday night on the main Parklife Stage, his performance oozed class, projecting visual sophistication and maintaining a pitch perfect vocal display throughout his set. Ocean, being one of the biggest stars on the planet, performed to a packed crowd who were capable of singing along to every word; that really says something about Parklife 2017! The crowd watching headliner Stormzy was revealing to me, the level of loyalty to grime was notable. Thousands were there to witness his powerful performance, capturing a new form of punk and keeping the underground alive and well.

Other great artists headlining Sunday were Carl Cox playing at the Warehouse Project stage, Eric Prydz at the Hangar, Dixon at the Palm House, Joseph Capriati at the Elrow Presents Far West, Joe Goddard at the Powered By Utility Studio and very fortunately Damian 'Jr Gong' Marley at the Temple stage, where it was probably the best place to be on Sunday. Marley's performance was on another level of sophistication - a blow away performance that should've been witnessed by all.

The organisers of Manchester's Parklife Festival have apologised after sending out marketing SMS messages to festivalgoers, claiming to be from the recipients' mothers. "Some of the Parklife after parties have already sold out. If your going, make sure your home for breakfast," the messages read, in a bid to sell tickets for the after-show events.

Manchester's Parklife Festival caters for a very specific audience; one look at the line-up and it's clear that few families would be organising a day or a weekend out with the kids to Heaton Park between June 8th and 9th, as this was a fiesta for the students and the twenty-somethings ready to see in summer with the help from some of the world's best DJs, most talked about hip-hop acts and some noted patrons of rock and pop in what was essentially a two-day-long party. It's a festival that holds pride in its urban setting, but unfortunately the organisers of the festival seemed to have forgotten about the metropolitan setting when it came to selling the tickets and as such the festival began to suffer a number of set backs before it had even gotten under way properly.

The festival was definitely over-sold, whether it was waiting two hours to board the shuttle service from Manchester to get to Heaton Park or the tinned sardines conditions festival-goers endured, it was easy to tell that organisers had forgotten that once you get to the festival area, there's nowhere else to go. No campsite to retreat back to when no one is playing that you want to see, and therefore no reason to leave the festival grounds, leading to some major over-crowding that was in danger of ruining the festival completely. Beside this unpleasantness, Parklife 2013 was actually a success, as the quality of the acts on offer was just too much to behold to put a dampener on the merriment, not to mention the weather - which as you can imagine, was a good thing considering the lack of options for cover should the heavens have opened.

The weekend was essentially a dance/electronic festival and from the get go Huxley, Dusky and Bondax kick-started a party mood, each act progressively delving deeper into the realms of house and dance. Going back-to-back in what was a sure-fire way to make sure things were filthy by around 5pm, Ben UFO and Pearson Sound continued to ramp up the party atmosphere with their set on the Drop the Mustard stage. Before things could get too much too early, it was time to head over to the Main Stage to see Jessie Ware. Beginning with 'Sweet Talk' and going through new single 'Imagine It Was Us' and fellow Devotion-track 'No To Love,' she manages to convert her studio sound to a four-piece set up so effortlessly, as though the album was recorded with a live band in the first place. Jessie's performance seemed to indicate that things could only get better, and after catching the pumping tail-end of Caribou's alter ego, Daphni, Four Tet went on to further this assumption. His live PA was simply sublime and although his placement on the Sounds Of The Near Future stage was a little odd considering what Kieran Hebden has achieved in his career, he emerged from the balloon-laden performance as one of the weekend's best performers. A garage-filled set (which even included some Oxide & Neutrino) from Krystal Klear and before he even had chance to finish his set, it was clear from the amount of people cramming into the SotNF tent who was coming on next. As with Jessie Ware, it's amazing to see what can happen in a year, and Disclosure were one of the most anticipated acts on hand throughout the weekend; with their live set going somewhere towards living up to hype. Their transition from tape to live performance wasn't completely seamless, but the young-guns of house managed to pull off a thoroughly crowd-pleasing display. 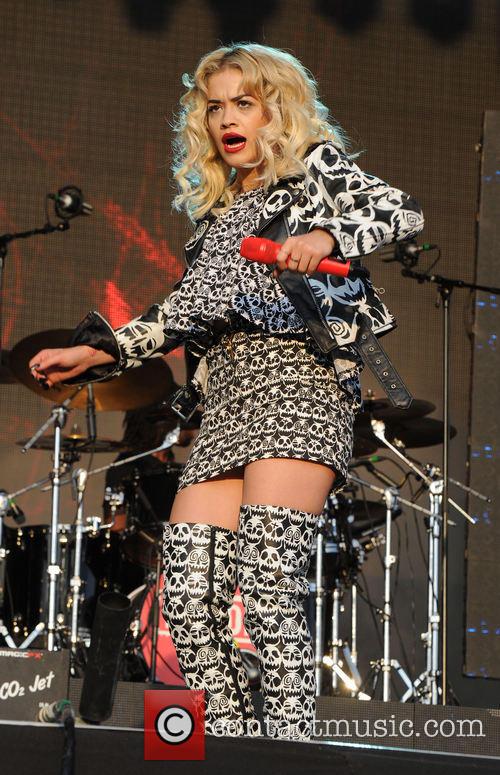