The Miserable Rich - Miss You In The Days Album Review

According to many a bio source, The Miserable Rich got their juxtaposing namesake from an experience that cellist, Will Calderbank and singer James de Malplaquet, had 'at the wedding of two rich aristocrats.' Hmm, how very interesting. This aristocratic presence is felt throughout the entire record. The reminiscent offerings of chamber/folk waft through like a ghost. It's semi-haunting, travelling on the same folk crossover route as other current artists rightfully resurrecting the folk genre like Beirut and Sufjan Stevens. 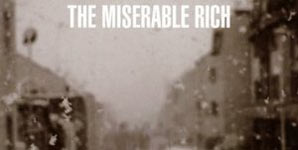 Every song seems to conjure up imaginary visuals, something that makes this quite extraordinarily personal. It's like a book, allowing you to envisage the characters and setting. 'Laid Up In Lavender' is like something out of Oliver! with its up, down rhythm, persuading you to bend your knees and ask politely for some more. The wondrous fairytale of, 'The China Shop Your Dreams' mopes around like a lovesick puppy with the whining violin and the profound voice recalling, 'I miss you in the days.' 'Pillion' begins with a jolly up-tempo phrase that wouldn't sound out of place in the picturesque heights of the animated Camberwick Green, accompanying Windy's walk back to her windmill. Finally, the last story of, 'Imperial Lines,' where the stately home theme recurs, with words of 'petticoats' and 'strange things.' The riff rings like a vintage Mission Impossible theme, or even better, the soundtrack to a real life game of Cluedo: murder mystery at The Miserable Rich mansion, Colonel Mustard in the conservatory with the dagger, and the like.

Story time aside, it's obvious that this band have got a knack for this 'chamber' thing. They interlock perfectly with their orchestral-like line up, where there's an elements of 80's favourites, The Stranglers, within. Well, Golden Brown at least, a song that this five-piece covered back on an EP in 2009. De Malplaquet's voice is not a million miles away from the hushed tones of Hugh Cornwell at a first play. This album could easily fall under the easy-listening category in all good retailers because it's like a route of escapism, back a few centuries. But thankfully, the making of this collection is that it doesn't sound wildly dated. The mixture of sounds just balances it on the cusp of old and new. Next time, something even more ghostly from the Brighton collective would be brilliant. They've got more to give on the spook front, no question.

The Miserable Rich - Miss You In The Days