Last night's gig at the Camden Electric Ballroom was cancelled two hours after it was due to start, with tonight's date in Manchester also postponed.

Some things never change. The Libertines, those glorious screw-ups of the mid-noughties, cancelled their headline show in London last night two hours after they were due on stage, citing a “medical emergency” as the reason for the postponement.

Their gig at the Camden Electric Ballroom on Thursday (September 10th) was part of a hastily arranged mini-tour of small venues around Britain announced just after their well-received headline sets at the Reading and Leeds Festivals at the end of August, in order to celebrate the release of their long-awaited third album Anthems For Doomed Youth, released on Friday. 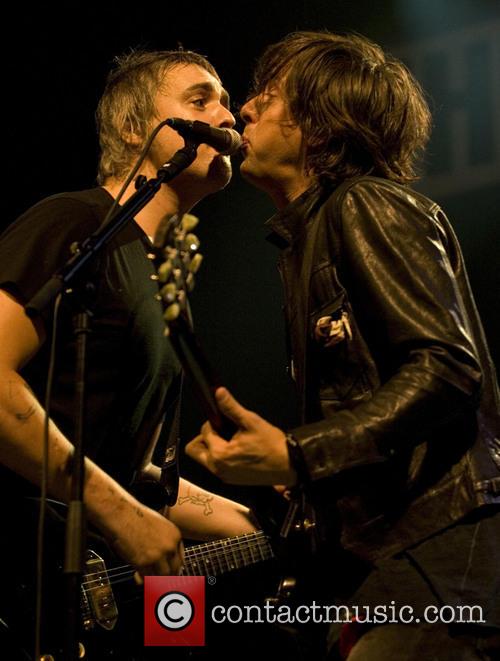 Pete 'n' Carl of The Libertines

The reunited Libs were due on stage at 9:15pm but didn’t show. As it became increasingly apparent that the band wasn’t delaying their entrance for dramatic effect, the crowd became more and more hostile and restless. At 11:30pm, a spokesperson for the group braved a fusillade of pint pots to take to the stage to announce that they were postponing and re-arranging the gig, as well as their scheduled gig on Friday at Manchester’s Ritz.

“Due to an emergency - a medical situation - tonight's show is being postponed,” the rep said. “I say postponed because I mean postponed, not cancelled. A new date will be released tomorrow,” reported The Guardian.

The Metro reported that the reason for the cancellation was that Pete Doherty, one of the group’s two songwriters and frontmen, failed to show up for the gig. A spokesman for Doherty, who has had a long history of drink and substance abuse that he is said to have finally beaten after a stint in rehab in Thailand (where the group recorded its latest album), had “no comment” as to his whereabouts.

The group later posted another apology on its Facebook page. “Peter, Carl, John and Gary apologise whole heartedly to their fans and will reschedule both shows as soon as possible. This will not affect any of The Libertines’ other commitments. HQ.”

More: Kate Moss and Jamie Hince’s marriage “past the point of no return”