Review of Anthems for Doomed Youth Album by The Libertines

The Libertines exploded onto the indie scene in the early 2000s, alongside the likes of The Strokes and The Vines. Wild and unpredictable, they caused a media storm with their well-documented antics and fall-outs. They sounded truly British; The Clash for a new generation, their sound encapsulating every seedy London pub and night out on the town. The relationship between Pete Doherty and Carl Barat was passionate and volatile, with the band eventually dissolving in 2004. 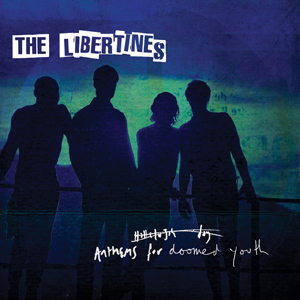 After a turbulent few years, in 2014 Doherty disappeared from the limelight and retreated to Thailand where he spent a length of time in rehabilitation. Thankfully, he seemed to find some stability there, and after a while the rest of the band reunited with him, hiring a studio nearby and eventually recording 'Anthems for Doomed Youth'.  But 11 years on from their last album, this is quite a different band. They've been through so much together, so many fights, prison sentences, and rehab-stints, that you're suddenly faced with a much older, wiser group. The volume and the passion are still there, but the sense of pure anarchy isn't quite as present any more. Instead, it's been replaced with a much more solid sound, and to be honest it's quite a relief, because if they hadn't evolved at all in over a decade then they probably would have produced a much weaker album.

The last 11 years may have made the band slightly less unpredictable than before, but they're still rowdier than most bands on the current indie scene. 'Barbarians' is a perfect Libertines album-opener: noisy, a little bit messy, and catchy as ever. It's followed by the single 'Gunga Din', and this is where the album really shines. Reflecting on a long road ahead, the band are not one to take the tougher times lying down. It's loud and defiant, a perfect representation of where the band find themselves today.

As with their previous albums there are softer moments, such as the piano-led ballad 'You're My Waterloo' and the melancholy 'Anthem for Doomed Youth', which is very reminiscent of 'Music When The Lights Go Out'. These songs prove that, despite everything that's happened in the last decade, Barat and Doherty are still two of the best songwriters around. However, there are a few songs that miss the mark, and unfortunately the album falls a little flat towards the end. While there are some truly great moments, these are interspersed with some slightly lacklustre tracks that are quite forgettable.

It's hard to tell if this album will be remembered as fondly as 'Up The Bracket' and 'The Libertines'. The two albums defined what was an incredible moment for indie music, particularly in the UK, and the music scene has changed hugely since then. The band now find themselves in a very different place to a decade ago, and only time will tell how much of an impact this album has. Past albums aside, this is a strong effort, and hopefully the start of a much more settled phase for The Libertines.