Review of The Kills and XX Teens live at Nottingham Rescue Rooms on Monday 10th November 2008. 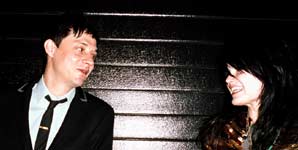 Without dwelling on the obvious too much, it's impossible not to mention The Kills without the name Kate Moss springing up mid-sentence, no matter what the context of the conversation may be. Sure, as a band with three albums and a clutch of (generally) well-received singles, they have established themselves as one of the UK's underground music scene staples yet despite the media attention prior to guitarist Jamie Hince's liaison with Ms. Moss, have never really made significant inroads commercially either here or anywhere else for that matter. Yet, in these strident times of recessions and a so-called credit crunch, tonight's show is a complete sell-out, an achievement in itself for a Monday night, traditionally the unofficial day of recovery from the previous weekend's excess.

Forgive me for stating the obvious but there is a sense of voyeurism around the room this evening. Already whispered rumours emerge that 'She's here! In Nottingham' which must be as much of a burden to the London-based duo as it is a marketing man and promoter's dream. One thing's for sure; you can bet your bottom dollar that the majority of the 500+ punters squashed into whichever tiny uninhabited space they can find aren't here for XX Teens. Not that it seems to matter to a band whose 2008 seems to have been spent on the road as perennial support band to pretty much every touring band you care to mention. As a result, their live show is at its most intense when they're in serious mode as on 'How To Reduce The Chances Of Becoming A Terror Victim' while their switch a slightly more playful alter ego is astutely effortless, the likes of 'Only You' and 'Darlin' becoming more energetic and vibrant than on record as a result. Augmented by the addition of New Young Pony Club and Kissy Sellout drummer Sarah Jones behind the skins this evening, XX Teens are more than just a welcome diversion from celeb-spotting, they're actually morphing into a tight unit that wouldn't look out of place headlining a venue such as this in months to come. If their songwriting on album number two can match their enthusiasm and obvious lofty ambitions, their ascent should be assured.

The last time The Kills played in Nottingham just over six months ago to a montage of black and white films in an art gallery, it felt like there was something missing. While Alison Mosshart is as engaging a frontwoman as they come; a menacing presence in the sphere of a modern-day Siouxsie Sioux with a vocal range PJ Harvey would be proud of, there has always been a nagging doubt about the band's ability to be able to rise above the obvious White Stripes comparisons and prove once and for all that they're more than the one-trick ponies some of their fiercest critics suggest, an admittedly difficult task at the best of times for a two-piece consisting of little more than vocals, guitar and sampling machine.

Tonight however, aided by a near-perfect array of sound both at the front and back of the venue, there are occasions when The Kills rise above the line reserved for the ordinary and actually display a dose of passion and excellence that casts all notions of supermodel girlfriends and Detroit duos out of mind immediately. 'Alphabet Pony' and 'U.R.A. Fever', by far the choice cuts from this year's 'Midnight Boom' collection are raging beasts of fury, Mosshart's writhing stage presence and rasping vocal lending itself perfectly to Hince's nouveau take on the blues. Similarly 'Kissy Kissy' and 'Fried My Little Brains' from the as-yet unsurpassed debut 'Keep On Your Mean Side' receive new leases of life here, no longer minimal four-track recordings but actually roof-lifting anthems that turn even the least devoted audience members gaze from wondering who the person standing next to them is to what's actually happening on stage.

As live performances go, this is just about as good as it gets for The Kills, and even though the voyeurs queue to get into the venue bar after the show, one suspects the talking point for the rest of the night will be about the show they've just witnessed rather than Jamie Hince's girlfriend.