The Killers - When You Were Young Audio Stream 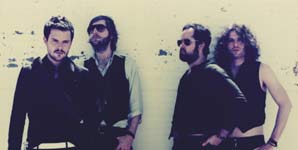 Artist: The Killers
Song title: When You Were Young
Genre(s): Alternative

When You Were Young
Audio


The Killers have completed the recording of their eagerly anticipated second album. It's Due to arrive in stores in October 3rd 2006, the as-yet- untitled new album.

The album was recorded in the new Palm Studios in The Killer's hometown of Las Vegas, with venerable British producers Flood (Mark Ellis) and [Alan] Moulder. Â

It marks a reunion of the duo who first came to prominence as the producers of Smashing Pumpkins' Mellon Collie and the Infinite Sadness (1995), and whose many credits as engineers, mixers and producers have gone on to include U2, PJ Harvey, Nick CaveÂ the Bad Seeds, and Erasure (Flood); and Nine Inch Nails, Depeche Mode, Swervedriver, My Bloody Valentine, Yeah Yeah Yeahs, and last year's special Hot Fuss (Moulder).