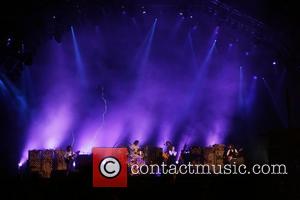 The American Airlines Arena line-up at the MTV Video Music Awards was so packed last night (28AUG05), The Killers and Mariah Carey had to perform at hotels in the area.

The Killers played live at Miami Beach, Florida's Hotel Victor, before dashing to the awards to pick up the night's Best New Artist Video prize, while Carey performed at South Beach's National Hotel.

Both performances were beamed live into the MTV telecast of the event.

Among those performing onstage at the awards show itself were Green Day, Shakira, 50 CENT and Tony Yayo, Coldplay and Kanye West and Jamie Foxx.