"I'm Sorry, We've Got To Stop", The Killers End Manchester Gig After 4 Songs 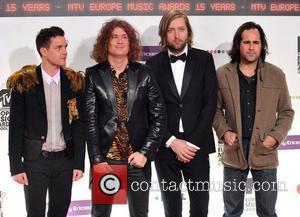 "I'm sorry. I've never had to do this before. We've got to stop," were the words of The Killers' Brandon Flowers in Manchester last night (November 13, 2012) after cutting short the band's arena concert just 4 songs in. The singer, 31, lost his voice and was forced to tell 15,000 fans to, well, go home.

"I'm sorry, we'll come back, I don't know what else to tell you.it's frustrating, I'm sorry, this is the town that we look forward most to coming to. I'm sorry, I don't know what else to say," said Flowers before sloping off-stage with the rest of the band. The group has also been forced to cancel tonight's concert in Manchester, owing to Flowers still having trouble with his vocals. The band issued a brief statement on Twitter and Facebook, telling fans, "Manchester, we started something we couldn't finish and we're so, so sorry. Working on rescheduling tonight and tomorrow's shows. Will let you know new dates ASAP."

Though Manchester fans will undoubtedly been frustrated at the cancellation, followers of the band have a potential Muse collaboration to look forward to. Two bands were hanging out together at the MTV Europe Music Awards, with Brandon saying, "We've become good friends with Muse. We get along so well, so I'd never rule out working together. We would be trying to outdo each other. It would be spectacular, the choruses would be huge."

Watch Brandon cutting the band's gig in Manchester short below: