Review of Sam's Town Album by The Killers 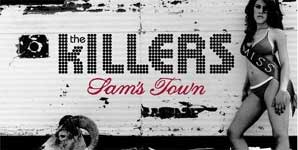 The Killers must have finally tired of their persona as one of the campest bands around as they have reinvented themselves far away from their foundation and mascara Hot Fuss days by revealing themselves as moustache and beard wielding cowboys hell bent on rock 'n' roll rebellion. Somewhere along the line from the bands epic debut, Brandon Flowers has realised the importance of a good show tune and their second album, Sam's Town, is full of them from the Meat Loaf/Bat 2 resonating When You Were Young to the rotting drug ranting of Uncle Johnny.

The first single to be snatched from the sure to be jumbo-platinum album is, When You Were Young, a track that's got as much balls as Mr Brightside with as much energy as Glamorous Indie Rock 'n' Roll wrapped up in as much charm and fascination as you'd like from the Las Vegas foursome. Having vanished from English radars for over a year there was always going to be a lot riding on this track to re-establish The Killers as the most essential band around and within the first 10 seconds you can't squabble their ability, and as the album unfolds you find yourself declining into the same depraved state of obsession that many people found themselves during the bands now shadowed debut.

Although the new grungy look will put off some indie-disco kids, the new Springsteen and Depeche Mode sound is stable beyond comprehension with thrice the arrangement and structure of their previous work holding together lyrics with more compassion and capability than ever before. The basic question that needs answering is; is this as good as Hot Fuss? And the answer is so undoubtedly, yes. If Hot Fuss hit the bullseye, this album has split a pin with precision as it's taken the bands raw energy, stripped it down and reassembled it into something much bigger than ever before. Sam's Town is like Hot Fuss on LSD and left in a Wacky Warehouse for a month before being taken for a spin with Evil Knievel and left to its own devices to fester. It's authority and style is equalled by its anger and tracks like Bones have a sinister flail amongst its operatic vocals that harness the darker side of Vegas as indeed the whole album does. "Don't you want to come with me, Don't you want to feel my bones on your bones, It's only natural", Brandon murmurs from behind the Monty Python crossed with Tim Burton instrumentations that gesticulate around from side to side like a pair of baseball boots in a tumble dryer.

Uncle Johnny Did Cocaine starts like a Sonic The Hedgehog theme tune and sadistically shifts into a depressing harangue like an 80s power ballad that's been left to decay in a cupboard for years without sunlight. The Killers of yesteryear would have surely made this a sarcastic song with mischievous riffs and bubbly bass lines, but with their new poise has come a will to expand their sound following on from the fascinatingly perverse Get Trashed that graced the Smile single.

With, Read My Mind, Brandon has given himself some room to vocally let go and yowl in a 90s fashion while the atmospheric, end of night, track has done what it took U2 over 20 years to realize. The well oiled Disney-esk soundtrack is a mammoth show tune rather than an indie anthem showing talent throughout its glittering riffs and pumping chorus until its bittersweet closing lines, establishing The Killers as stadium rock gods instead of flouncing grunge venue hanger-ons. The albums title track, Sam's Town, is again a kitsch performance ditty that has a 'live' feel to it in the way that Midnight Show did. Based around a nightclub in Vegas, this track reminds us of where the band came from with all their showmanship and euphoric displays of command and surging vigour which is at last on show in the way it should have been from the offset.

Enterlude and Exitlude add more smoke and mirrors to the floor show of Sam's Town and despite the album not having that same under-produced Brightside indie rock 'n' roll vibe, they have moved on in the way that their fans should, excepting the fruition of a band that's shaped another top quality album. From start to finish there are few limitations and little imperfections on this album and although you could use the phrase 'over produced' you would have to say it's been well 'over produced' and each track crashes into the next with decorum, gravity and majesty and forges a new direction for The Killers who have finally given us their true work.

Click Here for The Killers, When You Were Young Audio