Review of Tranquilize Single by The Killers 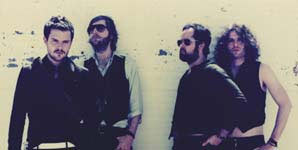 The music-loving population are on a constant roller coaster ride when it comes to The Killers. They continuously fall in and out of love with Brandon and Co., (me included). After 'Hot Fuss', the lads just couldn't find consistency in their stride. 'Sam's Town' spelled the beginning of a rocky patch for the foursome. Earliest glimpses of 'Sawdust' don't seem much more promising.

'When You Were Young', 'Bones' and 'For Reasons Unknown' where met by a wall of criticism and scepticism from their adoring fans. Fans wondered what was going on, in complete and utter disbelief. Some were prepared to suffer in silence; let their new music grow on them and see if their opinion improved any. The remainder of fans weren't willing to give The Killers a chance to redeem themselves; they simply cast their music aside and began a hunt for the next big exciting thing that the flourishing scene could offer them.

'Tranquilize' is another one of those grower tracks that The Killers are in a habit of making. It's not particularly special now but a month down the line, who knows how popular it could be? As far as I see, not very.