The Killers - Live at The Royal Albert Hall Album Review

Review of The Killers album Live At The Royal Albert Hall 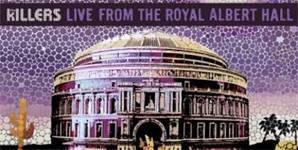 Killers fans are a spoilt bunch. With the band never off the radio, an array of hit singles, three successful studio albums, a b-sides album, and now to add to their immaculate output, a live album/dvd of the Vegas bands sold out Royal Albert Hall gig.

You really do get a lot of bangs for your buck here, the live album alone boasts 17 tracks, mainly of singles but also featuring underrated album tracks such as Sam's Town, Bling (confessions of a king) and most notably ,the excellent Jenny was a friend of mine.

It's a live album that highlights the killers change in sound over their three studio albums. What started out as synth drenched pop, owing lots to the Pet Shop Boys and New order, soon turned rapidly into stadium sized, Springsteen styled rock before again returning to pop with perhaps less synth the second time around.

Despite Sam's Town receiving mixed reviews, it isn't an album that Brandon Flowers and co have turned their backs on. It finds itself well represented here over both discs, with five tracks from the album including a beautiful acoustic rendition of the albums title track. The albums interlude and Exitlude also provide bookends for the Albert Hall part of the dvd.

You don't even need to see the dvd to know that the band have the audience of the Royal Albert Hall safely positioned in the palms of their hands. Throughout the gig, every word that leaves Brandon flowers mouth is sung back at him ferociously. What the dvd does show however, is how little time the crowd spend in their seats, the atmosphere is almost carnival esque. The Palm tree on stage certainly helps.

The Vegas band also prove they're much more than just a singles band as tracks such as Joy Division cover Shadowplay as well as B-sides and album tracks are as well received as the likes of Somebody Told Me and When You Were Young.

The dvds bonus material is certainly worth a look, it showcases the Killers ability to work festival crowds, the Oxygen performance of the Lou Reed collaborative Tranquilize is particularly special.

The Killers are a band that emerged with so many indie hopefuls at the beginning of the decade, most of those bands soon faded away but the Killers always had more about them and still seem to be shining as brightly as ever in their quest to replicate the status of bands such as U2. They might not have reached those lofty heights as of yet and maybe they never will, but on the evidence of these live recordings, you can't accuse them of not trying!