Rounder Records have given us a sneak peek behind the scenes of the making of US country rock band The Jayhawks' new album. The video shows us the band writing and recording in the studio, interspersed with an interview about all elements of the record with Marc Olson and Gary Louris. Marc and Gary also talk about the history of the band and how they got together. They give us their personal take on the songs and on the recording, including details of which bits are their favourites and why.

The Jayhawks will release their first album since reforming, called 'Mockingbird Time', on the record label 'Rounder' on September 5th in the UK and September 20th in the US and Canada. It is also the first album to feature all the original members of the band - Gary Louris, Mark Olson and Marc Perlman - in 16 years.

The Jayhawks formed in 1985 in Minnesota, with Gary Louris on electric guitar and vocals; Marc Olson on acoustic guitar and vocals; Marc Perlman on bass and Norm Rogers on drums. Throughout their history, they have had many past members, including for a brief period, Gary Louris. They were eventually signed to LA based record label Def American, whose roster also includes Johnny Cash, Slayer and System of a Down.

The Jayhawks have had two Top 40 singles in the USA and one in Canada ('Waiting For the Sun'; 'I'm Gonna Make You Love Me' and 'Blue', respectively). Five of their eight albums have also charted on the Billboard Top 200. The Jayhawks went on hiatus in 2005 to 2009, before reforming in 2010.

The Jayhawks Take Me With You...

The Jayhawks Waiting For The Sun... 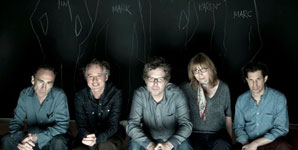 The Jayhawks Waiting For The Sun (live from First Ave.) Video