Industrial folk rockers The Jar Family are set to release their brand new uplifting but touching single 'Broken Minded' on September 3rd 2012 to be followed by their upcoming second album. They have recently also been preparing to release a free download track, 'Getting Better'.

The Hartlepool band have released a video for the single to accompany it. It is apparently set in a 12th century Knights Templar church with the band members in semi-old-fashioned dress sitting at a long table enjoying a large banquet and each other's company whilst lead singer Max Bianco belts out a desperate ballad for a loved one. It's got a very traditional folk sound behind the track but the gravelly vocals give it a contemporary indie rock twist that definitely adds to the heart of the song.

The Jar Family (Max Bianco, Dali, Al Devon, Richie Docherty, Chris Hooks and Keith Wilkinson) quickly earned an enthusiastic fan following after their first EP in 2010 and sold-out string of shows in its wake. This year they have had support slots for several big names including The Charlatans, Babyshambles, The Sunshine Underground, King Charles and Jake Bugg. Their album has been produced by Wilkinson and mixed by the talented John Cornfield who has previously worked on projects for Muse, Supergrass, Razorlight and Oasis. 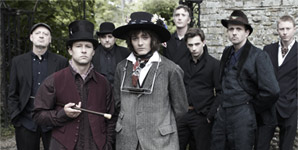