The Ivories - Reduce The Temperature Video

The Ivories
Reduce The Temperature

Leeds based four - piece, The Ivories are set to release their debut single in October on the 48 Crash label, home to Black Wire.

'Reduce The Temperature', intense yet infectious and already a favourite with Steve Lamacq, is released on CD and limited 7" vinyl. Recorded in their home town at The Leopard Lounge with Black Star Liner's Choque Hosein. Vinyl copies of the single will come backed with 'Tonight', while the CD will feature 'Disappointment', one of the highlights from the band's live set

The Ivories formed earlier this year when Helena Gee, promoter of local club night Release The Bats and former vocalist of The Holy Terror, joined a line-up of Emma Rowe; guitar, Cathy Russell; bass and drummer Anna Prior. Live sets are short, sharp and exciting and in recent months the band have supported the likes of The Futureheads, Eighties Matchbox B- Line Disaster, Art Brut and label mates Black Wire.

The Ivories, Reduce The Temperature, Video... 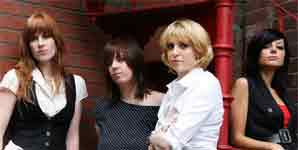