Channel 4 will be marking the tenth anniversary of 'The Inbetweeners' with a two-hour special show.

The cast of ‘The Inbetweeners’ have revealed that they’ll be getting back together to mark ten years since the show was first broadcast.

Simon Bird, James Buckley, Blake Harrison and Joe Thomas are set to participate in a two-hour celebration show featuring a selection of previously unseen footage, classic clips and offerings from famous fans of the iconic sitcom, which first arrived back in 2008.

Some of the sitcom’s most memorable moments will also be ranked in an awards segment that features categories such as ‘best ever moment’ and ‘best sex scene’.

It’ll be broadcast on Channel 4, but the network has yet to announce a broadcast date for the two-hour special. 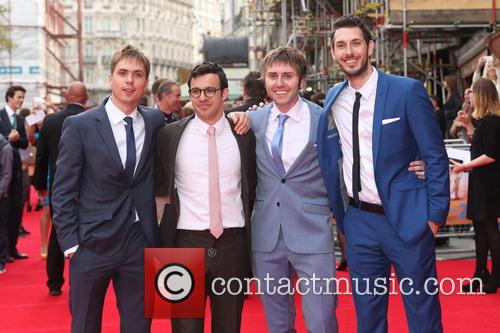 ‘The Inbetweeners’, which followed the desperate and hilarious travails of four sixth-formers at Rudge Park Comprehensive as they tried to find their identities, enjoyed three series which aired until 2010. It was then followed by two spin-off feature-length films, in 2011 and 2014 respectively.

It was critically and commercially successful, winning a BAFTA TV award and a British Comedy Award.

Tom Beck, Channel 4’s head of live events and commissioning editor for entertainment, said in a statement: “Will, Jay, Simon and Neil spent years failing to sneak into the best parties, so I'm very pleased to throw one that they're definitely invited to. I just hope Will brings his Mum.”

Co-executive producer Will Macdonald added: “The love for ‘The Inbetweeners’ is huge, the kind of love that Jay would boast he's had many times - big celebrities, millions of viewers and loving fans from across the globe. And it's so exciting the boys will be back together to feel that love from all those people and enjoy it first-hand. What could possibly go wrong?”

Fans shouldn’t be expecting any more new material from the show, however. Blake Harrison, who played the lovably dim-witted Neil, explained earlier this year that the cast are “too old” now.

“I just don't think it would work… The reason it was so funny is because you had these idiotic, ignorant lads that you let them get away with saying things that would be quite offensive. But as they get older you can't excuse it, I think.”

More: What the critics thought about ‘The Inbetweeners 2’ - reviews