The New Year's Day special didn't go down at all well with fans of the sitcom.

The negative reaction to the recent reunion of ‘The Inbetweeners’ was so negative that one of its stars, James Buckley, says he feels “hated” as a result.

Buckley and his co-stars – Simon Bird, Joe Thomas and Blake Harrison – took part in a two-hour Channel 4 studio special on New Year’s Day titled ‘Fwends Reunited’, hosted by Jimmy Carr. Alongside old clips and highlights of the show, the cast answered questions and chatted about their time on-set together to mark the 10th anniversary of the sitcom.

However, many reacted badly to the show, seemingly because many misunderstood the nature of the show and had expected a full, one-off reunion episode – even though it had been clearly advertised at the outset that there would not be one. 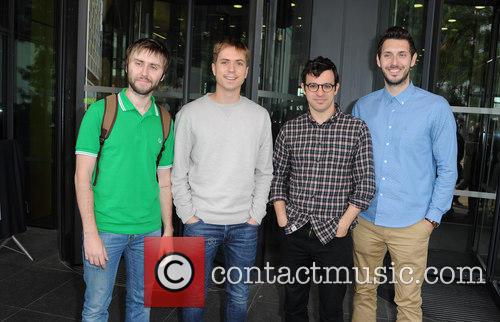 “Feeling pretty hated right now,” Buckley, who portrayed the hapless Jay in the series, tweeted the following day. “I’m sorry to anyone who feels let down with last night’s show. I’m especially upset as it really is the fans that made ‘The Inbetweeners’ such a success, it certainly wasn’t me.”

He added that he may produce an explanation video on YouTube to try to make amends with fans, or “leave it and move on”.

Buckley’s co-star Harrison, who played Neil, simply tweeted: “So, 2019 off to a good start.”

“This Inbetweeners 'reunion' has been on for 6 minutes and is already the most disappointing thing to happen in 2019,” one person watching tweeted, while another wrote: “All they had to do is write an hour long episode about a school reunion and everyone would've been happy. But NO, we get this rubbish. #Inbetweeners.”

However, one person reminded the naysayers that there was never going to be a new episode in the first place. “Do some people have no common sense or just can't read it's been said that the inbetweeners reunion many times that it was a reunion and not a new ep, stop moaning,” they tweeted.

Tracking the ups and downs of four socially awkward sixth-formers at Rudge Park Comprehensive, ‘The Inbetweeners’ was hugely successful during its original run for three seasons on E4 between 2008 and 2010. In addition to winning a BAFTA TV Award and a British Comedy Award, it led to two spin-off feature films in 2011 and 2014.