Canada's best kept secrets The High Dials go all 'pop' on their 4th full length. Anthems for Doomed Youth follows their mod influenced debut album 'A New Devotion', the psychedelic pop of 'War of The Waking Phantoms' and the dark country noir of their previous album 'Moon Country'. Hard to believe now but it's been 7 years since their debut and 'Anthems for Doomed Youth' also represents a return to their original home Rainbow Quartz. 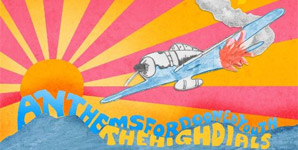