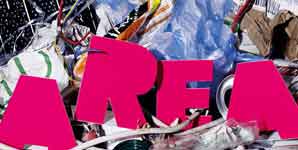 The mighty Futureheads return to see out their spectacular 2005 with a brand new EP. 'Area' may already be familiar to some as it became a favourite in their live set some time ago, proving a hit with their ever-increasing fan base. The EP is a stand-alone release for the band as they begin work on their second album due for release in mid 2006.

The Futureheads have had a fine year indeed, kicking off with the NME Awards Tour in February, 'Hounds of Love' gave them their first top 10 hit alongside 2 sell out nights at London's Astoria. March saw them re-release their debut album which has sold a quarter of a million copies to date, they played Coachella in Palm Springs in April and graced the cover of the NME in May before playing summer festivals in the UK, Europe and Japan throughout the summer. All this plus invitations to support bands such as Oasis, band idols - the Pixies, and more recently, the Foo Fighters – has left them on an all-time high.

As the festival season drew to a close, and the Pixies dates were complete, The Futureheads found some well needed time to record 'Area' at Miloco Garden, London in September. Other tracks 'Help Us Out' and 'We Cannot Lose' were recorded at a later date in Newcastle and all tracks were produced by the band.

Plans for their much-anticipated second album are well underway, in fact they are scheduled to begin recording with producer Ben Hillier (Depeche Mode, Doves, Blur etc) in the next few weeks. They aim to have it complete by late Janurary.

2004 saw them break on to the scene giving it a much needed kick up the backside, 2005 really put them at the top pf their game and 2006 could well be the year they go over the edge.
If you're not with The Futuremen yet, I guarantee you soon will be.

'Area' is released on 679 Recordings on November 28