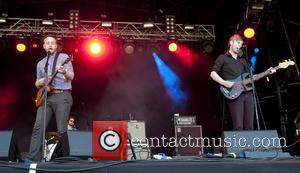 The Futureheads frontman Barry Hyde is trading in his guitar to pursue a long-held dream of becoming a chef.

The British rocker became interested in the culinary field after working with Juniper's Pantry owner David Gill, who organised the Gourmet Tent at the Split festival the band organised.

After Gill advertised for a trainee chef, Hyde applied and has been working at Juniper's Pantry deli in Sunderland, England for the past few weeks.

He tells NME.com, "I'm at the bottom of the ladder. I get to wear the whites (uniform), but I mainly do preparation, get shouted at and clean up after messy chefs."

Hyde compares preparing food to making music and explains he draws on his talents to help him.

He says, "There are similarities between music and food. They are both about creating something that exists in a moment in time, then it's gone and it's never quite the same next time you do it."

The 32 year old is hoping his new-found career takes him around the world to learn "about different country's cuisines," but stresses it doesn't mean the end of The Futureheads.

He continues, "I don't think we'll ever break up. It's just that we've been doing he band almost constantly for 10 years and we all wanted to do something different. We'll definitely be back, but for the moment we're on hold and I'm concentrating on this."