Review of News And Tributes Album by The Futureheads 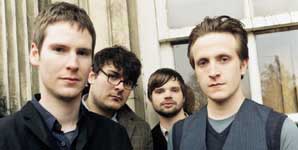 Pre-match hype is something we're all gonna have to get used to this summer, what with broken metatarsals, Paraguayan goalkeepers and Thierry bloody Henry no doubt odds on favourite to win the Golden Boot, never before has a World Cup been so eagerly anticipated.

Then of course, assimilate it to music and 2006 could also be called the year of expectation, with new records due by Bloc Party, Muse and of course, The Futureheads any time now. Which is where we're at, because make no mistake about it, 'News And Tributes' isn't quite what anyone dazzled by the stop-start-stop-start blitzkrieg that was 2004's eponymous debut album, in more ways than one.

Now before everyone accuses this reviewer of being an old fuddy duddy stuck in his ways and afraid of anything remotely connected with the thought of change, consider this little deity: If it ain't broken, don't fix it – which is quite frankly the stage where the Futureheads were at. Darlings of MTV, Radio One and Student Unions alike, mostly down to their unique interpretation of Kate Bush's 'Hounds Of Love', but universally surpassed by the majority of its' accompanying long player, their ascent from bedsit heroes to bonafide pop stars seemed signed, sealed and delivered. Another guaranteed recording career in the bag then, Simon.

But as happens with many bands – although it normally takes about three albums for rigor mortis to set in – The Futureheads have gone all grown up on us and made the album their mams and dads probably wouldn't mind listening to after a good Sunday roast followed by Apple Pie and custard.

However, that doesn't necessarily mean you should switch off just yet, because amidst all the mature grey areas, 'News And Tributes' does also contain several gems that oddly enough, knock spots off a lot of the first record. Take 'Cope' for example, which rumbles along on a bassline half-inched from Bauhaus' 'Dark Entries' before extolling itself into the kind of vocal operatic performance normally associated with Queen and 'Bohemian Rapsody'. Indeed, it's the intricate nature of some of the harmonies on this record that do suggest The Futureheads really worked their socks off in the studio to come up with something as near-perfect as dammit. The barbershop quartet bluster of 'Skip To The End' and jerky robotic stomp of 'Favours For Favours' both provide ample evidence that when Sunderland's finest get it right, they are quite simply in a league of their own. Likewise, 'Return Of The Beserker' is two-and-a-half minutes of the finest nihilistic punk this side of 1977 and is a firm reminder to all and sundry that The Futureheads are best with their feet to the floor rather than prone in relaxation mode.

Because the subtler, more laid back moments are what lets this record down. The title track passes by in a haze of dreary monotony while 'Burnt' and 'Cope' are so pedestrian they're worthy of a James Blunt album. And no, I'm not joking. Y'see, I'm all for development and moving forward at a rate of knots rather than cantering, but 'News And Tributes', whilst showing obvious signs of The Futureheads undoubted talent to create increasingly complex musical sculptures, also shows a weariness associated with has-beens of yesteryear, which is surely something the band themselves wouldn't want to be tarred with at this relatively early stage of their careers.