Left-field alternative pop didn't really get any better than Beautiful Freak in 1996 and arguably it's rarely been bettered since. The visionary concept of Mark Oliver Everett, 'E', was a breath of fresh air that fused genres, combined styles and ultimately delivered a fantastic off-kilter album. eels debut full length record is brilliantly sequenced, drawing you in immediately with it's lead single, Novocaine for the Soul, and leaving you wanting more with it's melancholic close out track, Manchild. The array of techniques, samples, instrumentation and inspired production makes 'Beautiful Freak' one of the most interesting, and at the time, arresting debut albums. 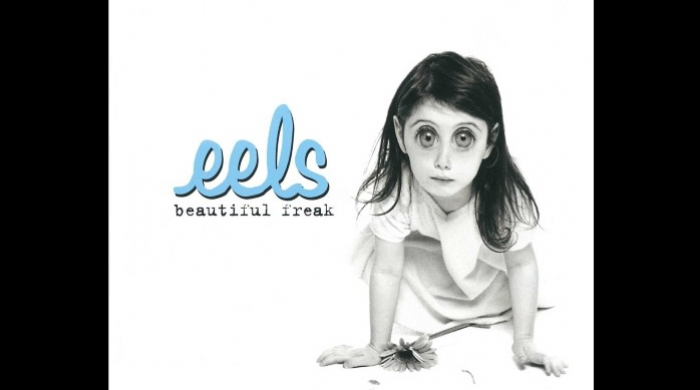 Within the opening two songs of Beautiful Freak there is a sample of Fats Domino and Gladys Knight, static, Jive, brooding strings, killer guitar riffs, a great walking bass line and some truly unforgettable lyrics; no wonder it grabbed everyone's attention and became a surprise top 5 album in the UK. Whilst the NME were not fans of the album, giving it a measly 5/10, they were in the minority as the album was generally well received and critically acclaimed at the time.

Everett, although given a great deal of creative credit for the album, was not alone on Eels debut album. Helping him produce the final sound were various personnel, including, but not limited to, Tommy Walter (Abandoned Pools) on bass, Jonathan Hayes 'Butch' Norton on drums, production and engineering and Michael Simpson of Dust Brothers fame, also on production and mixing duties.

The album was preceded by two singles, firstly Novocaine for the Soul in early February 1996, and secondly, Susan's House in May of the same year. The tracks were both released on the recently formed - Spielberg, Katzenberg, Geffen record label DreamWorks. Although they were first released in the US in 1996 it was to take a year before they would achieve success when they both charted a year later in the UK. When the album was released in August it too delivered better than anticipated sales success, going top five in the UK and achieving reasonable results in Europe.

The Rock'n'Roll Jive, plinky-plonk piano, dark strings and biting guitar riffs of Novocaine for the Soul were like nothing else around at the time and stood out as something different, something to stop you in your tracks and something worthy of your attention. Eels first single peaked at number 10 but it's follow up, Susan's House went one further and peaked at number 9. The track about E's former girlfriend was just as, if not more, creative than the first single and blended both spoken word and sung passages with harmonic hooks and memorable lyrics - "Down by the Donut Prince a fifteen year old boy lies on the sidewalk, With a bullet in his forehead, In a final act of indignity the paramedics take off all his clothesFor the whole world to see while they put him in the bag, Meanwhile and old couple argues inside the Queen Bee, The sick fluorescent light shimmering on their skin."

The subsequent two single releases from the original album faired less well on the charts. Your Lucky Day In Hell and the title track Beautiful Freak were definitely more album tracks released as singles rather than singles on an album. The opening line of the more sombre former track is a great example of Everett's lyrical dexterity and one that sets up the song beautifully as he sings, "Mama gripped onto the milkman's hand, And then she finally gave birth, Years go by, still I don't know, Who shall inherit this earth" whilst the latter is pure shoe gazing dream pop.

The combination of brilliantly composed songs with some inspired production techniques make Beautiful Freak a riveting listen throughout. The gruff vocal delivery and scuzzy guitar on Rags To Riches, the captivating roller coaster tale of My Beloved Monster and the frustration and torment delivered during Mental are all further high points on an album that has few flaws.