The Distillers' frontwoman Brody Dalle has revealed while they are waiting for their new album to come out they are "ready" to get to work on a follow-up. 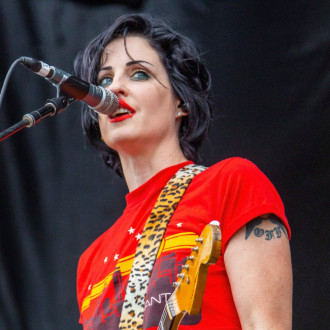 The Distillers are "ready" to make another album.

Brody Dalle and co made a comeback in 2018, releasing the fierce punk rock track 'Man vs. Magnet', the band's first new music since the 2003 LP 'Coral Fang'.

And they had planned on releasing a new album, but due to the Covid-19 pandemic the release has been pushed back.

The 'City of Angels' rocker says she hopes the record will be out "sooner rather than later" and also teased that there is already a follow-up in the works.

She said: “We’re booked up the wazoo to tour, but nobody really knows what’s going to happen.

“It’s kind of a c***shoot and the goalposts keep moving, so we’re just kind of flying by the seat of our pants. You know as much as I do now.”

Brody added to Spin: “I really have no idea what’s going to happen, but yes, we have a record coming out — hopefully sooner than later. And at this point, we’re pretty much ready to make another record too.”

The Australian-American punk rockers - who first formed in 1998 - confirmed they were getting back together for the first time since 2006 two years ago, when they announced they were playing Shaky Keens Music Festival in Atlanta, Georgia, in May that year, and they have since completed a number of comeback shows, including their first UK show in 15 years at Reading Festival in 2019.

The Distillers had split in 2006 after drummer Andy Granelli and bassist Ryan Sinn departed the group, with remaining members Brody and Tony Bevilacqua going on to form rock band Spinnerette together.