The Dead 60s have swerved back to the pulsing guitar pop that is their real roots. Recorded not in Liverpool this time, but in New York based Noise Studio, and produced by producer-in-residence there David Kahne, (New Order, Regina Spektor, Fishbone, The Strokes), 'Time To Take Sides' is a move on from the 'nihilistic punk with an Arabian sounding Eastern disco edge' of 'The Dead 60s'. The songs, like those on the first album, were worked out on stage. This time though the stages were American rather than UK, and it would appear from the melody that has crept into the new songs that the crowd there wanted more than just a vibe. Where once was just lyrics and beats there now are chords. What once sounded so tightly cropped now comes from a wider angle.

'After a year of touring the first album we wanted to capture the energy and directness of the live performance. We just wanted to get back and write direct and honest songs about the things we've been through'

The result? A big, bold rock sound that can and will fill stadiums with tight and linear songs that sing of the Saturday night, Sunday morning culture of everyday British life with a tough, street pop that tells the truth. This is the sound of the real Britain- the concrete Britain of late nights, cheap drugs, crap fags and stale beer in plastic glasses, it's the sound of frustration and hangovers but played out in the psychodrama of guitar pop, one of the last places where there is any freedom. The Dead 60s sing of this frustration and resentment but with such passion and inventiveness that they manage to turn the contents of yesterday's post Blair chip paper into a series of inspiring pop anthems. 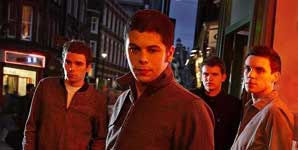