The Darkness - Is It Just Me Video 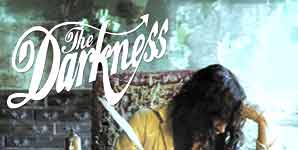 Artist: The Darkness
Song title: Is It Just Me

The Darkness are set to release their new single 'Is it Just Me?' through Atlantic Records UK on 20th February. This will be the second single to be lifted from their current album 'One Way Ticket To Hell ...And Back' which is fast approaching platinum status.

Available on CD, DVD and limited edition 7" picture disc, the single includes 2 brand new b-sides recorded and produced by Dan Hawkins at his home studio. It will be accompanied by the hilarious new video directed by award-winning Tim Pope who was also at the helm for video to the previous single 'One Way Ticket'.

The band's forthcoming tour will see them performing their new material alongside the classics and the shows promise to be, as always, so much more than ordinary, with plenty of surprises along the way. Support comes from Juliette and The Licks and camp Swedish rockers The Ark.

Dates are as follows:

The Darkness - Love Is Only...