The Darkness - One Way Ticket To Hell... And Back Album Review

Review of One Way Ticket To Hell... And Back Album by The Darkness

The Darkness
"One Way Ticket To Hell… And Back." 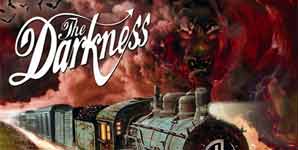 In the two years since the release of their debut record, things have changed vastly for The Darkness. Like many acts before them, they went from being darlings of the alternative scene to mainstream stars, and faced a backlash from those who originally adored them. The making of "One Way Ticket…" was interrupted by the sacking of bassist Frankie Poulain, but this obviously hasn't affected the band's confidence – guitarist Dan Hawkins has said: "The general feeling, listening to this record and knowing how difficult it was to make… is that we all think we're in the best band in the world again."

Title track and lead single "One Way Ticket" opens the album in trademark Darkness style, with a catchy riff and falsetto vocals all very much in check. It's stadium rock by numbers, and the mediocrity carries through to "Knockers", a mid-tempo affair built on a tight rhythm section. It's redeemed by a big chorus, but is far from special. The choice of Queen cohort Roy Thomas Baker becomes apparent on "Is It Just Me?" which finally sees the band step up a gear, with some soaring guitar work and a strong hook and chorus. Those who went to the Carling Festival 2004 may recall "Hazel Eyes", a track of Celtic mood with a stupidly catchy tune and daft chorus. It's everything that made The Darkness so loved when they first burst onto the scene, a knees-up that will put bounce into any audience!

A number of songs debuted on the band's arena tour last year have also made the cut, with the most impressive being "Dinner Lady Arms". The apologetic lyrics are sung in a convincing and uncharacteristically restrained style on a track with 'anthem' written all over it – much the opposite of the up tempo and dramatic "English Country Garden". An amusing novelty tune, it lifts the tone after the gloomier tone of "Bald", the heaviest track on the album. Musically imposing, it disappoints with a poor chorus after a promising build up. Also sub-standard is the finale song "Blind Man", a slow string-laden number that is easily forgettable.

While The Darkness have lost much of their novelty factor, it doesn't mean they are no longer a band worth your attention. "One Way Ticket…" utilises much of what made the band so enjoyable, and those looking to trash the quartet will be disappointed. At times they get it wrong, but in the main they produce catchy, fun songs that are easily digestible.