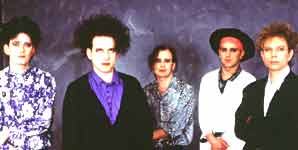 Rhino will continue their highly successful reissue campaign for The Cure with deluxe 2-disc CD reissues of The Top, The Head on the Door, and Kiss Me, Kiss Me, Kiss Me on August 8th.

Originally a postpunk outfit with gothic leanings, The Cure evolved into one of the most creatively satisfying groups to come of age in the 1980s. From dark dirges to dreamy pop, the music of their first two decades is adventurous, hypnotic, and rich with texture. Formed in 1976 by Robert Smith and schoolmates Michael Dempsey (bass) and Laurence Tolhurst (drums), the band was signed by Fiction Records on the strength of a demo recording of "Killing An Arab." By 1989, the year they released their stateside breakthrough, Disintegration, The Cure were playing stadium tours on both sides of the Atlantic. The intervening years witnessed such underground milestones as "Boys Don't Cry," "Close To Me," and "Just Like Heaven."

The Cure - The Lovecats

The Cure - The Caterpillar