Review of Mega Mega Mega Album by The Count & Sinden

Dance music acts are always ones for hiding nothing when making an album. Fact is, most people they're trying to impress are normally struggling to remember what track was what, usually from a night out when so off their monkey that just recalling what postcode they were in requires Tarot cards and an iPad. 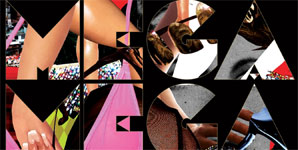 Ok, so very occasionally there are some undeniable reminders of a blinder - Daft Punk's Homework for example - but when Essex-based duo Joshua "Count" Harvey and Graeme Sinden's label bio tells you that in Mega Mega Mega they've "Written a new chapter in the history of forward-thinking, electronic dance music" you could be forgiven for not binning that old Basement Jaxx tee just yet.

You might also be worried that this is the same outfit who inflicted their 2008 debut single Beeper on an unsuspecting world, but thankfully that whiff of novelty never resurfaces here. Instead we're served up a record swimming in influences as diverse as garage, dancehall, hip-hop and Afrobeat, a brew so cosmopolitan they've cheekily named it "Essex world music".

As well as a free-thinking attitude, a genuinely interesting list of collaborators ensures that even when the musical thinking isn't as fresh, there's still a hefty dose of charisma to compensate. This applies to After Dark, a glittery slice of indie funk made in cahoots with Mystery Jets which proves that Two Doors Down was no pop fluke, whilst 77Klash does a similar trick of making sure the hyperextended soca of Roll Out still thrills.

Even better still, when everything snaps together, the results are one of the parties of the year; opener Do You Really Want It packs a thumping pneumatic bass throb and rhymes from Trackademicks that confirm the Californian as one to watch, whilst fresh from a contribution on Skream's Outside The Box, Katy B applies some soul to the chattering breaks of Hold Me.

Sinden is understandably proud of cutting such an impressive jigsaw from this much diversity, rightly stating "Everything is in there. But it's all twisted". The net effect is ironically that tracks which would be standouts on more complacent releases feel more like they're along for the ride here - Rye Rye's elastic work out on Hardcore Girls, the calypso-techno of Mega - but this restlessness should satisfy our ADHD complexes nicely. Mega Mega Mega isn't the sound of dance music being reinvented, but it's joyful, rule bending joi de vivre will still be with you on Sunday lunchtime after a very large one indeed the night before.