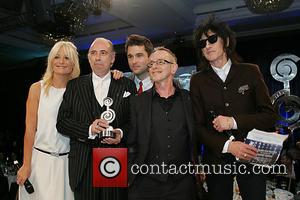 Former The Clash star Mick Jones has revealed he was writing new music with the band's late frontman Joe Strummer before he died in 2002.

The guitarist tells the Bbc the former bandmates were secretly working on tracks that Strummer was hoping to record with his group The Mescaleros.

Jones recalls, "We wrote a batch... The idea was he was going to go into the studio with The Mescaleros during the day and then send them all home. I'd come in all night and we'd all work all night."

But Strummer never recorded the songs they created together and his guitarist pal believes the punk rock icon may have been saving them for what could have been a The Clash reunion record.

He adds, "A few months later we were at some opening or something and I said, 'What happened to those songs...? What's wrong with them...?' He went, 'Oh man, they're the next Clash album'."

Joe Strummer's Thunderbird Up For Sale

Joe Strummer To Be Honoured In Spain

The Clash's Near Reform

The Clash: We Were Spied On