The City And Horses accompany their single, War paint - from their new album 'We Will Never Be discovered,' released on September 27th, 2011 on Paper Garden Records - with a suitably bizarre video.

The video for the pithy single, War Paint, follows a pair frolicking in the woods with the aforementioned war paint, emblazoned over their faces, whilst they engage in what can only be described as a ridiculous fight amongst the foliage and shrubbery that surrounds them. Whilst seeming to take the brawl entirely seriously, there's a whimsical distinction surrounding this low budget video. The pair engage in water gun combat and roll around on the muddy earth whilst wearing luminous spandex leotards and teddy bear helmets. Just another days work for the French pop artists and creators of the video, ContremaÎtre et sa ContremaItresse, the mercurial talent behind the videos for 'We Will Never Be Discovered' and 'Dum Dee Dum'.

Originally hailing from New York City, the band's debut album faired well amongst the critics, garnering positive reviews from publications like Time Out New York and The Big Takeover. Simple in their execution, but quirky in their outlook, the band provide tightly crafted pop songs with delightfully idiosyncratic flirtations. They have been compared to Teenage Fanclub, Jonathan Richman, The Velvet Underground and Orange Juice, but if their latest video is anything to go by, they defy comparisons, seemingly content to swim away from the mainstream, staying firmly in the 'lowstream'. Is that a thing? 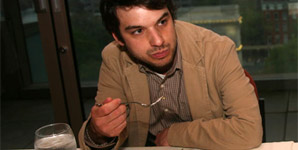