Far from halted by the wind and rain of a stormy February evening in Bristol, a near-capacity, music-hungry crowd crammed into the dark and dingy hull of the Thekla, a transporter boat turned gig-venue moored in Bristol's mud dock. As a fuzzy, overdriven bass riff followed by a torrent of pounding drums ripped through the darkness, it was instantly clear that, from an audience early for headline act, The Joy Formidable, and anticipating a blinding support set, no-one was to leave disappointed; The Chapman Family had arrived, bringing a raging storm of their own aboard the Thekla.

Opening with 'All That's Left To Break', The Chapman Family set their intimidating, angst-ridden scene with the tracks' lengthy instrumental introduction laden with menacing harmonies. The band instantly meant business; an ominous, foreboding kind of business. With drummer and bassist grimacing with pain whilst energetically pounding out a thunderous, determined force alongside the two guitars' haunting tones, front-man Kingsley roared brutally honest, dark and cynical lyrics with every bit as much power, conviction and feeling as his band-mates' accompaniment. From the opening track alone it was clear that The Chapman Family were unleashing an almighty torrent of energy on a small stage in a venue similarly much too small for them; they are easily capable of bigger. Wasting no time, the band then raged into former-single 'All Fall', maintaining their established drive and determination throughout; Kingsley's confident, passionate vocals sounding clear over the wall of vengeful accompanying noise. 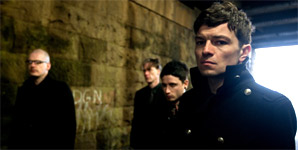 Into their current single, 'Anxiety', The Chapman Family seemed to be challenging their lyrics, 'they say your best isn't good enough', by constantly fighting to better their best with their swaggering, potent musical blend. Giving more and more to their performance through distortion-ridden 'Something I Can't Get Out', their set further intensified and ripped through the Thekla's hull as a barrage of angst-fuelled sonic aggression which continued to strengthen through 'Kids'. Towards the close of their concluding track, 'Million Dollars', front-man Kingsley had ditched his guitar and wrapped the microphone lead round his neck, screaming lyrics in a voice of desperation and, with each perfectly choreographed thrust, tightening the leads' grip on his throat intent on asphyxiation; a final push which brought The Chapman Family's performance to a climax and an intense, dramatic conclusion.

Throughout their live performance, The Chapman Family proved their undeniable passion and determination; Kingsley meant every word of his vocals, the drummer, Phil, intended every aggressive strike, guitarist Paul, every menacing strum, and Pop, every stomp-accompanied thrash of his injured bass guitar; 120% conviction, nothing less. On their outstanding recordings, The Chapman Family evidence a raucous, energetic, confident post-punk blend; in their live performance, this was further emphasised and intensified and the dark-clothed band unleashed their full potential as a torrent of potent sounds, of dark and troubled energy.

Though tour-mates The Joy Formidable followed with a superb, well-received, energetic headline set, The Chapman Family proved themselves undoubtedly more than worthy of headline slots in larger venues. The Thekla audience was treated to a blinding, intense set from a band both emotionally-fuelled and musically tight that left their crowd with a definite appetite for more. 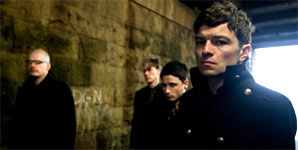 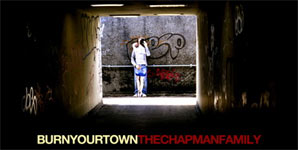 The Chapman Family - Burn Your Town 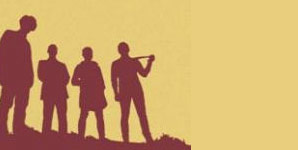 The Chapman Family - All Fall