Jay Z and his producer The Bullitts are working on the musical score to The Great Gatsby.

And they’d better get a move on because the film’s due out in May, after being delayed to ensure it “reached the largest audience possible,” the BBC reports. The Bullitts tweeted the news the other day, letting the world know that he and his musical companion are busy working on the music for Baz Luhrmann’s glitzy adaptation.

“Jay-Z and myself have been working tirelessly on the score for the upcoming #CLASSIC The Great Gatsby! It is too DOPE for words!” came the tweet. It shouldn’t come as too much of a surprise, given that the trailer released for the movie already features Jay Z and Kanye West’s ‘No Church In The Wild.’ There’s been no official word from Jay Z on the matter but we’re excited to hear what he’s created for Luhrmann’s movie.

Baz Luhrmann’s take on English literary classic The Great Gatsby is already spinning into the tens and tens of millions of dollars thanks to an ambitious aesthetic direction, a stellar cast of star names and filming out in Australia that went long over schedule. So you might as well spend a bit more on one of the biggest stars in music to work on the film score eh?

If the words on Twitter of The Bullitts Jeymes Samuel are to be believed, then the songwriter has teamed up with none other than Jay Z to write the score for the much anticipated adaptation of F. Scott Fitzgerald’s 1925 novel, which recounts the story of a millionaire through America’s prosperous ‘Roaring Twenties’ era. Writing on the micro blogging site, Samuel wrote “Jay-Z and myself have been working tirelessly on the score for the upcoming #CLASSIC The Great Gatsby! It is too DOPE for words!”

It should be noted that neither Luhrmann or Jay Z himself have confirmed this, but there is evidence-of-sorts in that the director used one of Hova’s tracks for one of the film’s trailers, whilst he’s also reportedly been playing the rapper’s tracks to pump himself up on the set of the film. If Samuel was involved it would certainly be a big coup for the multi-talented artist, who can count actors Idris Elba and Lucy Liu among his friends and collaborators. 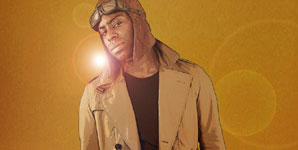