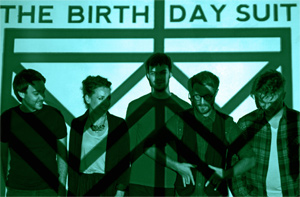 Interview with The Birthday Suit November 2013

Idlewild guitarist Rod Jones has been making music with his band The Birthday Suit for the last few years. Together, they have released two albums with a third - 'A Hollow Hole Of Riches' - ready to drop in Spring next year. The album promises to be a step above the previous two and their latest single 'A Bigger World' (featuring Scott Hutchison from Frightened Rabbit) is testament to that.

Rod took time out before hitting the road to chat to us about the new album, Idlewild and a very odd online campaign to boycott Idlewild members' side projects.

CM: After Idlewild's success, were you apprehensive to start a solo project of your own?
Rod:
Not really. It felt more like a fresh start without the pressure and expectation of an Idlewild album. I had been working with a group of good friends and musicians for a while and it felt quite organic and exciting. I knew that we'd be starting from scratch despite my previous work and there was something freeing about that.

CM: There was an online campaign recently to boycott Idlewild members' side projects in the hope that it would bring Idlewild back together again. Can you tell us more about the comments you received and the website that was set up?
Rod: It came as a huge surprise to me that someone would think this was a good idea. I'm sure it was just a minority or even maybe one person but it was quite hurtful still. The comments sent about our new video and to our band page were very derogatory about myself and other members of The Birthday Suit and made me feel really disheartened. These people are my friends and musicians whom I respect greatly and them being treated this way made me really consider whether I wanted to continue to make music at all. We work really hard on our music in creating something we really believe in together and this was just a real kick in the face. Aside from all this, the future of Idlewild will be decided on by the members of the group in our own time and any side projects we do have no bearing on this.

CM: You wrote an open letter to fans after getting wind of this strange boycott campaign mentioning you questioning making music at all. Are there any other times that made you feel like this?
Rod: I'm sure, just like anyone else, there have been times when I've been dissatisfied and unsure about what I do but this is just normal in life. I am greatly thankful for the opportunities I've had over the years to make a living from music and it's a very fortunate life to lead, but there are always ups and downs in anything we do. There have been times I've questioned what I do but that is why we all sometimes take time to do other projects and get involved in things that are important to us like working with the Scottish Mental Health Arts & Film Festival over the last few years which has been one of the most rewarding things I've ever been involved in.

As much as this campaign made me feel like giving up, however, the overwhelming support from fans and friends quickly made me realise just why I wanted to keep making music and I really want to thank everyone for that from the bottom of my heart.

CM: Idlewild's early days were much more punk/hardcore than what the band evolved into. Do you ever miss making noisier records?
Rod: To be honest, I think a band evolves in the same way we do as human beings when we grow and experience life. Listening back to a record from 10 years ago is like looking at a photo of yourself then and sometimes just as difficult to stomach. As much as this is the case, I do feel proud of what we did however hard I find it to revisit. The noisier element is something I still enjoy and has a place in the sound of The Birthday Suit, however just maybe not in later Idlewild records. A band is so much the sum of the personalities involved and that has dictated that Idlewild evolved the way it has. That is why I think the two bands are so different to me even though some see similarities.

CM: 'A Bigger World' sounds more cohesive than previous singles, how has your sound evolved from Idlewild and your first few albums to now?
Rod: I guess it's a mixture of a few different things; maybe years of learning a craft and growing confidence in my own writing, lyrically. To start with, The Birthday Suit records were really me finding my feet again and learning to make records without the usual collaborators. This maybe gave them a slightly erratic feel. This time, the input of the other band members - David, Jacqueline, Steve and Sean - much more so on this record than the first two has meant the sound has a much more rounded and interesting feel.  It really feels like a band this time and not a solo project and this has given a much more accomplished sound, I think. It takes a while to learn to play and write together.

CM: Scott Hutchison from Frightened Rabbit features on the single - how did he get involved?
Rod: I was really keen to have a gang of voices singing in the chorus of this one to reflect the sentiment of the song and I knew exactly what kind of voice we were missing. Scott was the obvious choice and I've been good friends with him for a long while. I simply sent him the track and he said he liked it so it just went from there. I'm also a fan of Scott's guitar playing as I think he has an unusual and characteristic style so it seemed a no-brainer to ask him to play a guitar solo while he was in the studio and I'm so glad we did. I love it!

CM: 'A Hollow Hole Of Riches' will be out in March 2014 - what can fans (old and new) expect?
Rod: Quite a change this time. It's much more a collaboration between us all and the sound really reflects that; much more so than on the single, even. There is still the heavy lean on catchy hooks and melodies but treated in a more relaxed and confident way if that makes sense. I feel, lyrically, I have found my style now and I'm much more confident and the rest of the band really have gelled together and have found their sound, I think. I'm genuinely excited about people hearing it.

CM: After 18 years of being involved in music, what advice would you give to those willing to give it a shot?
Rod: I'd just say: do it because you love it. It can be hard work but the reward you get from just one person understanding or appreciating what you are trying to do is immeasurable and a unique feeling.

CM: What are The Birthday Suit's plans in the run up to the album release?
Rod: We are on a mini tour to promote the single in November and then a couple of Christmas shows but mainly just rehearsing and trying to make sure that when we tour the album next year we can put it across the way we want to live.

The record is also available from 4th Nov - 4th Feb as a pre-order limited edition through Pledge Music where fans can get it a month early with bonus features so we'll be doing some DIY label stuff and posting a lot of CDs hopefully!

If Idlewild ever do return, will you still continue on as The Birthday Suit - which would take precedence now?

Definitely. This band is not a substitute or alternative to Idlewild for me. It's just another aspect of my life and career. Both can happily run side by side. One is as important as the other to me and it's just about concentrating on one for a while then the next. 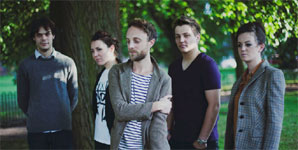 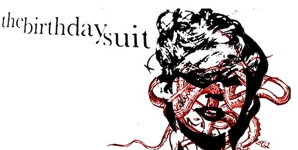