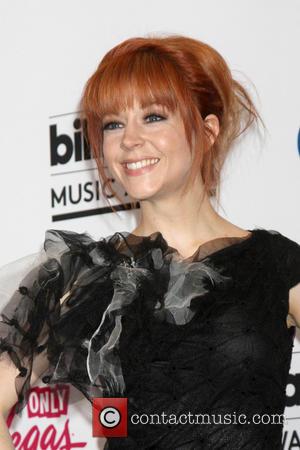 The Blank Space hitmaker, who went into the prizegiving with 14 nominations, took home one of the first awards of the night for Top Billboard 200 Album for her smash hit 1989.

Her friend Sam Smith was the other big winner of the night, taking home the Top Male Artist, New Artist, and Top Radio Songs Artist prizes.

The British soul singer was unable to attend the event, as he's on strict vocal rest after undergoing throat surgery last week (14May15), but he did send a pre-taped video message, during which he held up cue cards with his acceptance speech written on it. It read: "First, Thank you Billboard for this incredible honour. Secondly thank you to my amazing fans. It's time like this that I realise how lucky I am to have you in my life. Can't wait to get this surgery out of the way so I can sing my a** off for you again.

Other multiple winners included Pharrell Williams, who swept the three R&B categories and Iggy Azalea, who was also a triple winner, Hozier and One Direction.

Mariah Carey, who recently kicked off her Las Vegas residency at Caesars Palace, took the stage at the Billboards for the first time in 17 years and treated the audience with a performance of her number one hit Vision of Love and her latest song Infinity.

Actress Molly Ringwald celebrated the 30th anniversary of The Breakfast Club onstage as she introduced Simple Minds to the stage for a performance of their iconic hit from the movie, Don't You (Forget About Me), while other show highlights included performances by Van Halen, Ed Sheeran, Kanye West and the cast of hit U.S. hip-hop drama Empire.

Star-studded duets were also a theme throughout the night, as Meghan Trainor and John Legend, Little Big Town and Faith Hill, Chris Brown and Pitbull, David Guetta and Nicki Minaj, and Britney Spears and Iggy Azalea all took the stage for memorable performances.

Rapper Ludacris returned to host the prizegiving for the second year in a row, alongside Legend's wife and supermodel Chrissy Teigen at the MGM Grand Hotel & Casino.

The list of winners at the 2015 Billboard Music Awards is:

Top Hot 100 Song - Meghan Trainor, All About That Bass

Top Radio Song - John Legend, All of Me

Top Digital Song - Meghan Trainor, All About That Bass

Top Streaming Song (Audio) - John Legend, All of Me

Top Christian Song - Carrie Underwood, Something in the Water

More: Jason Aldean Is Only Platinum-selling Country Artist Of 2014